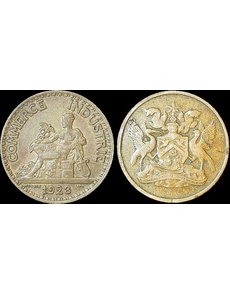 The obverse of a 1923 French 50-centime coin, left, depicts the Roman god Mercury, the god of commerce. On the right is the reverse of a 1967 1-cent coin issued by Trinidad and Tobago. A search of rolls of U.S. dimes recently yielded both foreign coins.

The U.S. 10-cent coin is much too small for me to comfortably handle in my relatively large hands.

I am, without question, all thumbs at manipulating these 17.9-millimeter coins while attempting to examine them with my magnifying lens or jeweler’s loupe.

Because of my clumsiness, I am a reluctant searcher of dime rolls. As dimes take four times longer than any other denomination to search through, I would rather search through cent rolls.

The slight increase in the size of cent coins makes it much easier to pass each coin through my hand.

But being an avid roll searcher, I put my reluctance to search dimes aside whenever a large number of the “wee” coins becomes available at my local bank.

As always, I’m glad I did. While the coins discovered are not particularly valuable, they are still unusual finds!

I always get a kick out of the non-U.S. coins that emerge from dime rolls since their discoveries are made easier by their obvious “unlike-a-dime” appearance.

Measuring 18 millimeters in diameter, the first unexpected coin I found was a French 1923 aluminum-bronze 50-centime piece.

The obverse depicts an image of the Roman god Mercury (Hermes being his Greek counterpart), seated above the date and facing left. To his left is a caduceus and to his right, a rudder. To the left of the date, is the name DOMARD, indicating that the design was created by Joseph-Francois Domard (1792 to 1858).

The reverse design shows the denomination in the center with the text BON POUR 50 CENTIMES (“good for 50 centimes”) within a ring surrounded by CHAMBERS DE COMMERCE DE FRANCE.

Beneath the denomination is a cornucopia, which is the Mint mark, indicating the coin was struck at the Monnaie de Paris.

Under a plan with Chambers of Commerce throughout France, the Paris Mint began producing 50-centime and 1- and 2-franc “tokens” that were issued by the chambers from 1921 to 1929. These pieces eventually came to be accepted as coinage.

The next unusual coin I found was a 1967 cent of Trinidad and Tobago, measuring 17.8 millimeters, struck in a bronze alloy.

The obverse design of the coin indicates the denomination, the date and the country of origin. Being a bit of a birder, I was curious about the birds that were depicted in the design of the coat of arms on the reverse.

The design shows two hummingbirds on a shield. Holding the shield on the left is a scarlet ibis and on the right is a cocrico. The cocrico is the national bird of Trinidad and Tobago.

I look forward to hearing about your discoveries. Please feel free to share your finds by emailing me at foundinrolls@netscape.net.