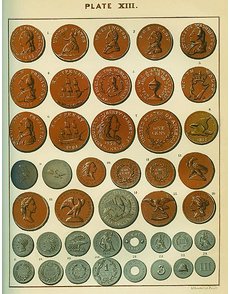 This plate of coins is plate number 13 from the 1859 first edition of Dickeson’s American Numismatical Manual.

Coin collectors in 2014 can choose among dozens of superb reference books. In 1858, American numismatists had no good choices. The few books published on the subject covered coinage history, but offered neither values nor mintages. Most references were unillustrated, and none were comprehensive.

Collectors therefore searched for coins they had literally never seen, and sought pieces that didn’t exist (much time was wasted seeking phantoms like “1815” cents).

That all changed in 1859, when Dr. Montroville Wilson Dickeson (1810 to 1882) wrote his American Numismatical Manual. The title’s spelling was quaint, but the book itself was a modern marvel. It was a big (nearly 12 inches tall), 256-page hardcover, with bigger ambition, covering everything from ancient “Indian Currency” to newfangled Flying Eagle cents, listing the coins by year, and even identifying several die states.

It boasted 19 lithographic plates, each depicting multiple coins, all tinted in appropriate hues of copper, silver and gold. Dickeson had collected “Indian Currency” the hard way, having spent 1837 to 1847 traveling the length of the Mississippi Valley, excavating mounds created by Native American cultures that had flourished along the river from 2000 B.C. to A.D. 500.

Though not a modern professional archeologist, Dickeson was a careful excavator, whose meticulous records and drawings, preserved at the University of Pennsylvania, comprise the only record of scores of mounds now leveled by urbanization. Dickeson was also a showman who exhibited his collection in museums and expositions.

The centerpiece of these shows was the enormous moving panorama that he commissioned from the artist John J. Egan. Nine feet high by 400 feet long, it was painted from Dickeson’s sketches about 1850.

Today it is in the collection of the St. Louis Museum of Art. In 1848, Dickeson settled in Philadelphia, and started a medical practice, but his passion for the past, including coinage, remained unabated.

His American Numismatical Manual was a hit, with a second edition appearing in 1860 and a third in 1865.

Despite having conducted extensive research within the most notable collections of the day (Joseph J. Mickley, Winslow Howard, Matthew Stickney), the huge scope and pioneering nature of the book made errors inevitable.

Dickeson’s conclusions about “Indian Currency” were controversial, and quickly discredited; by 1970, when Don Taxay wrote Money of the American Indians, he didn’t even mention Dickeson.

Dickeson identified “varieties” that did not exist, and missed many that did. He sometimes guessed wrongly, and bought into myths like the “Good Samaritan Shilling,” even though numismatists such as Jeremiah Colburn had already debunked it.

Despite its flaws, Dickeson’s book was the only comprehensive guidebook to American coinage until Wayte Raymond published his Standard Catalogue of American Coins in 1934.

As for Dickeson, he was a man “whom renown outran.” No Philadelphia newspaper eulogized him when he died.

JOEL J. OROSZ is a charter member of the Numismatic Bibliomania Society and co-author of The Secret History of the First U.S. Mint. He can be reached at  Joeljorosz@gmail.com.