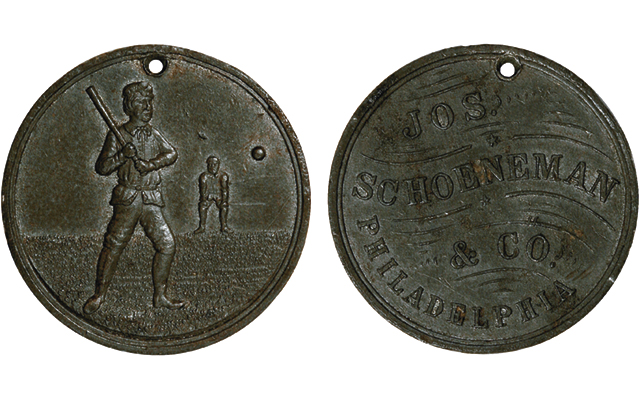 A charming 19th century depiction of baseball on a store card token.

Few recent issues have gotten coin collectors excited — both in the United States and around the world — as much as the 2014 Baseball Hall of Fame commemorative coins.

Last month Paul Gilkes took our readers behind the doors of the Philadelphia Mint to see the production of these coins.

This month our staff looks at the many ways to incorporate a baseball theme into the broad category of numismatics.

From the introduction of legislation for the baseball commemorative coin program to the Mint’s challenges in producing a curved coin; from the ordering frenzy that came with the March 27 release of the coins during the March Baltimore Expo, to the coins’ robust secondary market, Paul, and Coin World, have covered all aspects of this popular, game-changing coin.

Next I drew from Coin World’s rich archive of stories to look at reader responses to three other U.S. commemorative coin programs over the past few decades that have had baseball-themes.

Surprisingly, baseball’s time at the Olympics as an official sport was short, lasting from just 1992 to 2008. But it is recognized on U.S. commemorative coins from the 1992 and 1996 games.

Baseball is a sport that has transcended cultural barriers, and William T. Gibbs looks at medals honoring four men who played baseball from the 1930s to the early 1970s depicted on medals.

Exonumia — which includes medals, tokens and awards — can be found and discovered outside the mainstream of collecting, and provides a rich context for regular issue and commemorative coins.

Jeff Starck — our in-house baseball expert — contributes the feature story’s introduction and takes a look at another area of expertise: coins of the world. Jeff reminds us that although baseball has a reputation as America’s National Pastime, today the game is an international sport.

Michele Orzano explores paper money and related items depicting, and related to, baseball, including advertisement notes that were especially popular with merchants at the end of the 19th century. Like medals or tokens, such as the one depicted alongside this story, ad notes can be affordable, interesting and found when hunting through dealer inventories or online.

We had a lot of fun putting together this story and hope that it, along with Coin World’s editorial coverage generally, helps you both learn about things in your collection and introduce you to new things to collect.

Whether you read us online or in our traditional format, thank you for letting us be a part of your collecting journey.