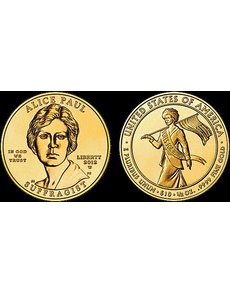 After months of waiting, collectors will be able to acquire the first of the four 2012 First Spouse half-ounce gold $10 coins when the issue featuring suffragist Alice Paul goes on sale Oct. 11.

Production of the 2012-W First Spouse coins was delayed because of metal flow problems filling the design elements of the Alice Paul and Frances Cleveland (first term) coins, as well as surface finish concerns with all of the coins.

While those striking problems have apparently been rectified, U.S. Mint officials have not disclosed details of the technical modifications that were implemented to resolve the production deficiencies.

The use of Paul’s image on the obverse of the First Spouse gold $10 coin representing President Arthur is mandated by the Presidential $1 Coin Act of 2005 (Public Law 109-145).

With the exception of the Alice Paul coin, the legislation requires that the First Spouse coins for those presidents who did not have a spouse while serving depict on the obverse a Liberty portrait based on a coin circulating during that president’s term of office.

The legislation specified that Paul appear on the coin for the Arthur administration rather than a Liberty portrait. Paul, a leading strategist in the suffrage movement, was born in 1885, during President Arthur’s term of office.

Paul was instrumental in gaining women the right to vote in the election of future presidents through the adoption of the 19th amendment to the U.S. Constitution in 1920.

The coin’s obverse portrait of Paul was designed by Susan Gamble, a master designer with the U.S. Mint’s Artistic Infusion Program, and sculptured by U.S. Mint Medallic Sculptor Phebe Hemphill.

Hemphill designed and sculptured the coin’s reverse, which depicts a participant marching in a suffrage parade, holding the U.S. flag and wearing a banner that says VOTES FOR WOMEN.

The maximum mintage for each of the 2012-W coins is set at 13,000 across all product options. Customer demand will determine the ratio of Proof coins to Uncirculated coins produced within that maximum mintage.

Orders for the Alice Paul and the Suffrage Movement gold coin will be accepted at the U.S. Mint website, www.usmint.gov/catalog, and by telephone at 800-872-6468, starting at noon Eastern Daylight Time Oct. 11.

Hearing- and speech-impaired customers with TTY equipment may order at 888-321-6468.

Since the inauguration of the First Spouse Gold Coin Program in 2007, the price charged by the Mint for each coin has more than doubled as the value of gold each coin contains has nearly tripled.

Concurrent with that rise in value of gold and the price of the coins, a drop in the maximum mintage has been registered for each issue and for the number of coins actually sold, beginning in 2010.

The Martha Washington and Abigail Adams coins were offered jointly beginning June 19, 2007, at $429.95 for the Proof coin and $410.95 for the Uncirculated version. The spot price of gold fluctuated between $650 and $660 per troy ounce at that time.

The Mint imposed a household ordering limit of five coins per each option.

The maximum combined mintage for each 2007 design was 40,000 coins, with customer demand to decide the split. However, after the coins quickly sold out, U.S. Mint officials changed that provision, dividing the maximum mintage at 20,000 Proof coins and 20,000 Uncirculated pieces based on the orders already received.

Collector demand stayed strong for the subsequent release of the Thomas Jefferson, Liberty First Spouse coin, the first to depict coin designs from a presidency where the chief executive was unmarried or his spouse had died before he took office.

The Jefferson coin’s obverse design is derived from Robert Scot’s Draped Bust half cent, 1800 to 1808.

However, declining collector interest in the coins led Mint officials to begin reducing the maximum mintages of the coins in several steps, starting in 2008. The Mint also changed household ordering limits several times.

The highest reported mintages from the U.S. Mint for the entire series is for the Jefferson, Liberty coin, with 19,823 Uncirculated coins and 19,815 Proof pieces.

Sales for some of the most recent coins have ended at approximately 3,000 pieces. ¦