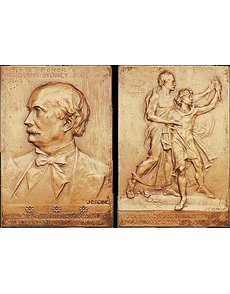 Bronze plaquette honors Algernon Sydney Sullivan, a New York City attorney who played a significant role in the functions of the Southern Society.

Enduring metal allows medals to contradict Shakespeare’s observation, “The evil men do lives after them, the good is oft interred with their bones.” One example is a 61- by 89-millimeter plaquette portraying the otherwise obscure lawyer-philanthropist Algernon Sydney Sullivan. The medal was designed by French sculptor Jules Edouard Roiné in 1907.

A leading figure in New York law and society until his death in 1887, Sullivan was born in the frontier settlement of Madison, Ind., on April 5, 1826. His forebears settled in Virginia in the 1700s, but his father, Jeremiah, took the family west in 1816 where the older Sullivan became an Indiana Supreme Court Justice.

Frail in health, Algernon was educated at home and later at Miami University in Oxford, Ohio. He practiced law in fast-growing Cincinnati, and invested heavily in local businesses that were later wiped out by the financial crash of the late 1850s.

Algernon began again in New York City, where he was admitted to the bar in 1857. City life included “down home” organizations such as the New England, Pennsylvania and Southern societies, and Sullivan was prominent in the latter. His death brought an outpouring of tributes written in ornate “gilded age” style, gathered into a 137- by 190-millimeter blue hardcover memorial book also housing an example of the Roiné plaquette.

Long forgotten, a few of these books were found several years ago at the old headquarters of the American Numismatic Society.

The ANS began its own medal series in 1866. Some collectors saw the Sullivan plaquette as a new discovery in that series.

Research found that the Southern Society had proposed that the ANS bestow as many as five awards to top achievers in the New York Bar exam each year.

In 1925, the Sullivan family foundation gave the project to the Southern Society until that organization folded in 1973. Today, more than 20 southern colleges bestow a Sullivan Award. Some feature the 1907 plaquette reverse design.

The 1907 obverse bears a Sullivan bust left in frock coat and “flyaway” tie above the tribute HE REACHED OUT BOTH HANDS IN CONSTANT HELPFULNESS TO HIS FELLOW MEN. The reverse shows him in Roman toga with flaming torch, lighting another torch held by a youth holding a law book, with inscription below of AS ONE LAMP LIGHTS ANOTHER NOR GROWS LESS SO NOBLENESS ENKINDELETH NOBLENESS. LOWELL.