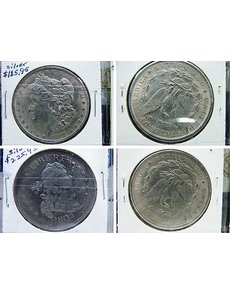 Police in Gadsden, Ala., are searching for a man who passed off 40 counterfeit silver dollars June 24 at a local pawn shop, the pieces including a Morgan dollar bearing a date and Mint mark of an issue that does not exist.

After the pawn shop’s owner purchased the coins for $1,120 and the suspect left, closer inspection of the coins determined they were made of some kind of base metal, possibly steel, Hallman said. Hallman said the fakes looked well made upon cursory glance.

The 40 counterfeits included Peace dollars; Draped Bust dollars dated 1797 and 1804, the latter of which only 15 genuine examples are known, each worth millions of dollars; and Morgan dollars dated 1885-CC, 1887-CC and 1903-CC (a nonexistent coin).