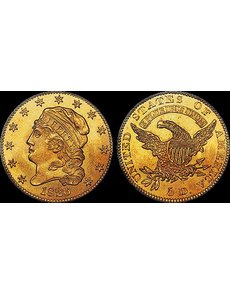 The only example in private hands from among three known BD-2 1826 Capped Head gold $5 half eagles will be offered at auction Jan. 9 in Orlando, Fla.

The finest known example of only three 1826 Capped Head, Small Letters gold $5 half eagles will cross the auction block Jan. 9 in Orlando, Fla.

It is one of 23 coins consigned as the David & Sharron Akers Collection to be offered by Heritage Auctions at as part of its Florida United Numismatists convention Platinum Night auction.

Graded Mint State 66 by Professional Coin Grading Service, it is attributed as the Bass-Dannreuther 2 variety in Early U.S. Gold Coin Varieties: A Study of Die States, 1795-1834 by John W. Dannreuther and Harry W. Bass Jr. Two varieties are known for the 1826 half eagle — the BD-1 or Large Letters variety, 40 to 50 known, and the BD-2 variety.

The Akers’ BD-2 1826 half eagle is the only example that is available to collectors.

The obverse of the BD-2 coin is distinguished by the placement of the 13th star, located to the bottom right of the portrait. The star is high and distant from the curl in Liberty’s hair.

The reverse used with the BD-2 die marriage features smaller letters in the inscription than used for the BD-1 coins, hence the Small Letters designation.

The BD-2 coin reflects the lone use of this particular obverse die. The reverse of the BD-2 variety was used also to strike the lone variety of 1827, and the BD-1 variety of 1828/7 half eagle.

The Large Letters reverse for the 1826 BD-1 coin has larger letters in the inscription.

A numismatic luminary who was among the coin’s previous owners was Col. E.H.R. Green, who also owned, at one time, one of the other two BD-2 coins. That second example once owned by Col. Green is now part of the National Numismatic Collection in the Smithsonian Institution’s National Museum of American History. The second coin became part of the National Numismatic Collection in 1968 through a congressionally legislated donation from the Josiah K. Lilly Estate.

That example is considered to be in About Uncirculated, Cleaned condition, according to Jeff Garrett and Ron Guth in Encyclopedia of U.S. Gold Coins 1795-1933.

The third known 1826 BD-2 coin, identified in the Heritage auction lot description as of “Extremely Fine Sharpness, Repaired,” is among the holdings of the Harry W. Bass Jr. Research Foundation, currently on loan to the American Numismatic Association.

As a date, the 1826 Capped Head half eagle has a recorded mintage of 18,069 coins. Most examples of the date have probably been melted or otherwise lost.

The first auction appearance that can be traced with certainty of the Akers 1826 BD-2 half eagle is Henry Chapman’s December 1921 sale of the collection of Philadelphia collector John Story Jenks, according to Heritage.

According to the Heritage auction lot description, soon after the 1921 Jenks sale, the BD-2 1826 half eagle ended up in the hands of noted numismatist, researcher and pattern book author Edgar H. Adams.

It is believed Adams may have acquired the coin as a partner or agent for prominent numismatist William H. Woodin, who later served as Treasury secretary in the Franklin D. Roosevelt administration. Woodin was one of the most accomplished collectors of his time for U.S. gold coins and patterns.

A range of other coins

The Akers consignment of 23 coins includes other rarities beyond gold.