McCloskey to step down from Liberty Seated club 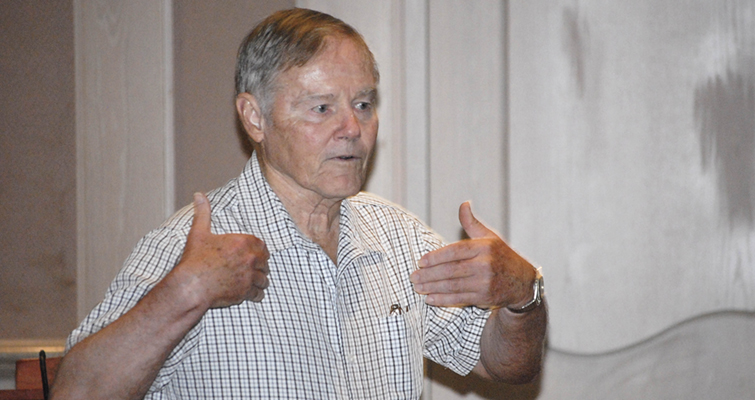 John McCloskey, president of the Liberty Seated Collectors Club and editor of The Gobrecht Journal since 1975, announced Aug. 15 he would retire from both volunteer positions, to complete work on reference books on Classic Head gold $2.50 quarter eagles and $5 half eagles. 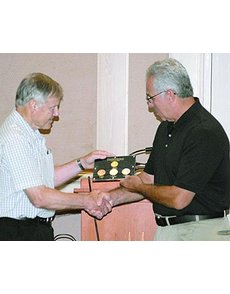 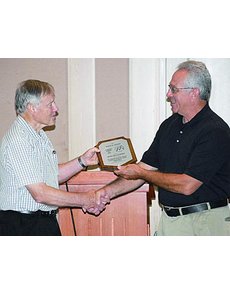 McCloskey, who often excluded himself from consideration for the Kamal M. Ahwash Literary Award because as LSCC journal editor he selected the award candidates, reconsidered for the 2012 competition. Here, McCloskey receives the current award from Bugert.
Previous
Next

After 38 years as president of the Liberty Seated Collectors Club and editor of The Gobrecht Journal, John W. McCloskey will be “retiring.”

McCloskey, 75, made the announcement Aug. 15 to LSCC members attending the annual club meeting held in conjunction with the American Numismatic Association World’s Fair of Money in Rosemont, Ill.
McCloskey informed LSCC members that he will step down from the elected presidency and volunteer editorship, positions he has held since 1975. He decided to retire to allow time to complete his book manuscripts on Classic Head gold $2.50 quarter eagles and $5 half eagles.

McCloskey had quietly informed some LSCC members attending the Aug. 14 annual meeting of the John Reich Collectors Society of his plans to announce his retirement at the LSCC meeting. McCloskey, and a number of JRCS members, are members of both specialty clubs.

McCloskey’s elected term as president ends Aug. 31, 2014. His final issue of The Gobrecht Journal as editor will be the June edition.

While McCloskey will be walking away from the presidency and editorship, both roles he found demanding but fulfilling, he says he will continue as an active LSCC member and continue to write articles for the journal.

The remaining LSCC leadership has already begun the process of finding replacements to fill both positions.

The LSCC has known only one other president/journal editor in its history — Kamal M. Ahwash, the key founding member of LSCC, who in 1973, along with McCloskey and a handful of other collectors attending the ANA convention in Bal Harbour, Fla., founded LSCC.

McCloskey said Ahwash, a dealer known to be the premier authority on Seated Liberty coinage in the 1960s and 1970s, had an extensive inventory of Seated Liberty silver coinage from half dimes through dollars.

Collectors and dealers would bring their Seated Liberty coins to Ahwash for sale or to seek his knowledge.

Until the publication in 1977 of Ahwash’s Encyclopedia of United States Liberty Seated Dimes 1837-1891 with McCloskey’s collaboration, the hobby had no reference on the series.

McCloskey said that during the 1973 ANA, he, Ahwash and a handful of like-minded Seated Liberty coin aficionados formed the foundation for the LSCC. Ahwash used his own customer mailing list to ship the first three issues of the club’s journal in 1974 to interested hobbyists.

In 1975, Ahwash turned over the presidency of LSCC and editorship of the journal to McCloskey after realizing he did not have the time to do the work required to run the organization, publish the journal and operate his own coin business. Ahwash left both volunteer posts in more than capable hands.

A numismatic researcher and prolific writer, McCloskey has written extensively for both The Gobrecht Journal and the John Reich Journal, as well as other numismatic publications, including Coin World.

McCloskey said he has also overseen the printing of the journal, to ensure each of the nearly 600 dues-paying LSCC members has a clean copy of the journal, devoid of ink stains, miscollated and improperly trimmed or missing pages.

For the March 2014 journal, McCloskey said he plans to contribute an article detailing how he produced and shipped each issue.

When article submissions from the membership have fallen short of filling the journal’s page count, McCloskey often filled those pages with his own original research and observations on die production, coin production and more.

McCloskey, a retired professor of mathematics at the University of Dayton in Ohio, is planning to devote more time to his own writing projects on U.S. gold coins that have taken a back seat to his other hobby duties for years.

However, McCloskey said he has enjoyed the challenge for nearly four decades.

In recognition of McCloskey’s tireless contributions to the LSCC and the hobby, LSCC Vice President Bill Bugert, on behalf of the membership, presented McCloskey during the Aug. 15 LSCC meeting with a complete four-piece set of LSCC 40th anniversary medals.

The obverse of the medals bears Christian Gobrecht’s Seated Liberty design, with the reverse depicting the flying eagle as seen on Gobrecht dollars.

The four club medals were struck by Daniel Carr at his private Moonlight Mint in Colorado.
Details about the medals (and about Liberty Seated Collectors Club membership) can be found at www.lsccweb.org.

Soon after the presentation of the set of medals, McCloskey was recognized with the Kamal M. Ahwash Literary Award for 2012 for his article in The Gobrecht Journal titled “The Magnificent Dick Osburn Collection of Liberty Seated Half Dollars.”

McCloskey said that on many occasions over the years he removed himself from contention for the Ahwash literary award because he thought his position as journal editor and as the person who selected the candidates for best journal article might provide him an unfair advantage to receive the accolade.

On Aug. 14, during the JRCS annual ANA meeting, McCloskey was recognized by being inducted into the JRCS Hall of Fame.

The LSCC leadership is not waiting until McCloskey’s retirement becomes effective in 2014 before it fills the void. Steps are already being taken to provide for a smooth transition.

Bugert said he will likely take over editorship of The Gobrecht Journal with McCloskey’s September 2014 departure.

The club president’s position is elected from the LSCC membership.

“We are already aggressively working on a plan for a seamless transition to the new club leadership and membership support,” Bugert said. LSCC IT/Marketing Director Gerry Fortin is leading the transition team, assisted by Bugert, Craig Eberhart and LSCC Secretary-Treasurer Len Augsburger.

“We are in the process of drafting a transition schedule with a target for new officer nominations by Jan. 1,” Fortin said. ¦