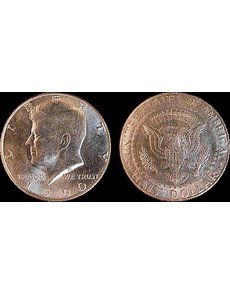 This 1990-D Kennedy half dollar was struck multiple times on the reverse face by a false die composed of a relatively soft metal. The obverse face was presumably cushioned by hard wax or a mold. 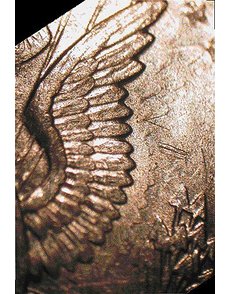 Multiple impressions of the right-positioned wing show a degree of lateral offset impossible to achieve in a tightly confining collar. 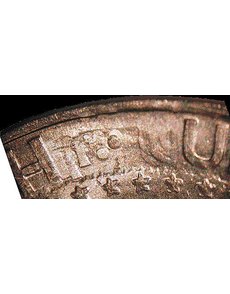 Multiple impressions of the U of UNITED, the H of HALF, and the dot that separates them show a soft, blended overlap consistent with the use of a counterfeit die.

It is sometimes useful to revisit coins that have previously appeared in Coin World.

This is especially true for highly unusual pieces whose etiology or authenticity is uncertain. A recent case involved the re-examination of several two-tailed Canadian cents that were originally considered mules struck by paired reverse dies. Subsequent analysis determined that these coins are better interpreted as double-struck pseudo-mules (Collectors’ Clearinghouse, April 25, 2011, March 19, 2012, April 23, 2012).

Another prime candidate for reconsideration is a very strange 1990-D Kennedy half dollar that appeared in the March 14, 1997, Collectors’ Clearinghouse. It was sent in by Walter O’Neill and described by Coin World news editor William T. Gibbs. The obverse design seemed normal but the reverse design appeared to have been struck around six times (see photos). The column offered several possible explanations for the coin, and recommended further examination to determine a cause and whether it was genuine or fake.

Until recently I was unaware of the coin’s existence as its date of publication preceded my entrance into the hobby. I was introduced to it by its current owner, coin dealer Curt Kelsey. He posted a link to a scanned copy of the article over at the online forum that I host, the Error Coin Information Exchange (http://groups.yahoo.com/group/errorcoininformationexchange/).

Upon seeing the black and white images, I was immediately suspicious and invited Kelsey to send the coin to me for a closer examination. Once in hand, it took me only seconds to determine that the coin was a fake. The reverse face had been struck multiple times by a false die.

Basically, someone tried to duplicate the appearance of a “one-sided” multi-strike. Such errors occur when a loose die (or die assembly) rotates or shifts laterally between strikes while the coin remains affixed to the opposite die. I have seen less than a dozen one-sided double-strikes (no triple strikes), and all but one involved a loose hammer die. Therefore, a coin that shows six strikes on the face struck by the anvil (reverse) die would be quite unprecedented.

Many clues attest to the fraudulent nature of this coin.

The coin is slightly oversized, with a diameter of 30.74 millimeters. The normal average diameter for a Kennedy half dollar is 30.61 millimeters. The width of the collar is held to very strict tolerances and a difference of 0.13 millimeter is outside the range of normal variation.

The reverse face bulges out slightly, a fact made clear when you place the coin on a flat surface. The coin rocks when pressure is applied to the obverse rim. Multiple strikes will not cause this type of deformation.

While there is one known rocking Kennedy half dollar, it was struck in 2001 at the Philadelphia Mint, is represented by many pieces, and was caused by a die subsidence (sunken die) error affecting the reverse die.

The reeding on Kelsey’s coin shows no disruption. While this is not impossible, it is unlikely. The collar would have to have remained fully deployed throughout the entire series of strikes.

The dramatic lateral offset seen between the normal design and the extra design elements is incompatible with a genuine Mint error. Lateral movements of the anvil die are tightly constrained by the surrounding collar. Only slight lateral shifts are possible unless the collar breaks apart or tears free of its moorings. Neither event occurred here.

The coin generally lacks the sharp but incomplete penetrance of previously struck design elements through the final set of die-struck design elements. In most areas the coin instead shows the soft, blended overlap characteristic of a coin struck by a relatively soft counterfeit die.

The multiple sets of extra design elements show subequal strength. In a genuine multi-strike, the earliest strikes should be largely or completely effaced by subsequent strikes.

The genuine die-struck elements have a battered appearance. This is also true of the reverse design rim, which is flattened and roughened in spots.

Gibbs reported the presence of machine doubling on the obverse, especially on the letters of LIBERTY. I concur with this observation but am confident that it is unrelated to the counterfeit strikes on the reverse face. Gibbs also noted some flattening of the reeding near the obverse face. I too detect subtle flattening, but cannot determine if it is related to the counterfeit strikes.