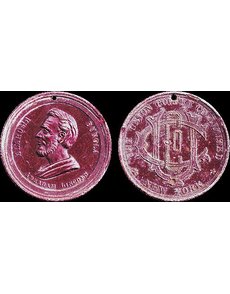 Abraham Lincoln’s effigy was called out to advertise Union Coffee’s Alaroma Bunola brands circa 1880s to 1890s. This piece was produced on vulcanite (hard rubber).

Union Coffee Limited of New York City was a prolific 19th century advertiser, and today sales sites such as eBay frequently have sales of items representing the brand. I recently was fortunate to acquire four of the company’s hard rubber (vulcanite) political tokens, 40 millimeters in diameter, with portraits of Abraham Lincoln, Ulysses S. Grant and Grover Cleveland (two visages).

Although the pieces are sometimes referred to as medals, the expert on such pieces, David Schenkman, calls them tokens in his publications, such as his seminal TAMS Journal article, “An Introduction to Hard Rubber Tokens.”

Russ Rulau cataloged the Union Coffee 40-millimeter white metal pieces as NY-NY 340 to NY-NY 344 in his Standard Catalog of United States Tokens, 1700-1900. He does not catalog the hard rubber varieties, which are also 40 millimeters, and weigh 11.55 grams, according to the American Numismatic Society.

Effigies of U.S. presidents were employed on these hard rubber tokens. These included Washington, John Adams, Jefferson, Jackson, Monroe, Lincoln, Grant, Garfield and Cleveland. Rulau mentions them in his catalog, but does not list them. He ascribes this series to the 1890s, as did Schenkman before him. Since Cleveland’s terms spanned the 1880s to 1890s, they may be correct.

According to Schenkman, “Each type was issued in as many as five colors — tan, green, dark blue, maroon and bright red.” Four of these colors are represented in my small sample.

Reverses of both series feature an elaborate monogram formed by the letters U, C, and Co for Union Coffee Co. Tokens are virtually always found holed, a situation exonumists characterize as “holed, as made.”

The Union Coffee Co. owned a patented process for roasting coffee beans “retaining its strength and aroma ... put up in one pound packages and hermetically sealed in its own natural strengths and flavor” for 25 cents per pound, according to a contemporary ad.

The company staged “taste tests” to popularize its brands. A local merchant that handled the Alaroma and Bunola brands would set up at a fair or other social gathering, and dispense the coffee gratis. According to an 1888 newspaper account of one such test, Alaroma brand tasters at the fair were “thus able to practically test the merits of this brand.”

An Indiana couple named their second and third daughters, Alaroma and Bunola, in 1894 and 1897, respectively.