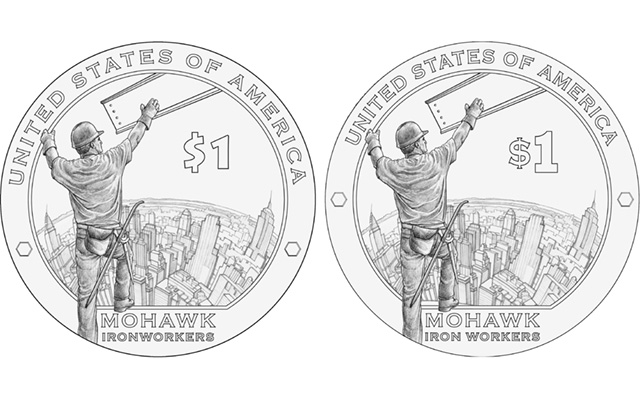 The final design, above left, as sculptured for the reverse of the 2015 Native American dollar, was modified from the recommended design, above right.

The approved design sculpted for the reverse of the 2015 Native American $1 coin shows some elements modified from the design recommended by both the Commission of Fine Arts and Citizens Coinage Advisory Committee.

The reverse design depicts a Mohawk ironworker reaching for an I-beam that is swinging into position. Rivets punctuate the left and right side of the border, and a high elevation view of the city skyline is seen in the background.

The main modification is that the inscription UNITED STATES OF AMERICA is more spread out, changing the relative positioning of various letters in that inscription compared to other elements of the design. The hexagonal rivets on either side of the inscription UNITED STATES OF AMERICA are also consequently lower in the border than in the proposed design. The ironworker's left hand on the final design is under the upright of the T in UNITED, whereas in the proposed design, the the N in UNITED is positioned above that left hand.

Also, in the inscription in the bottom border, below the panoramic view of New York City, on the final design, IRONWORKERS appears as one word, while on the recommended design, it appears as two words, IRON WORKERS.

Deputy Treasury Secretary Sarah Bloom Raskin, on behalf of Treasury Secretary Jacob “Jack” Lew, gave final approval to the adopted design on July 21, 2014. The design was one of 21 designs reviewed independently by both congressionally authorized advisory panels. Both the CFA and CCAC recommended the design that Raskin approved.