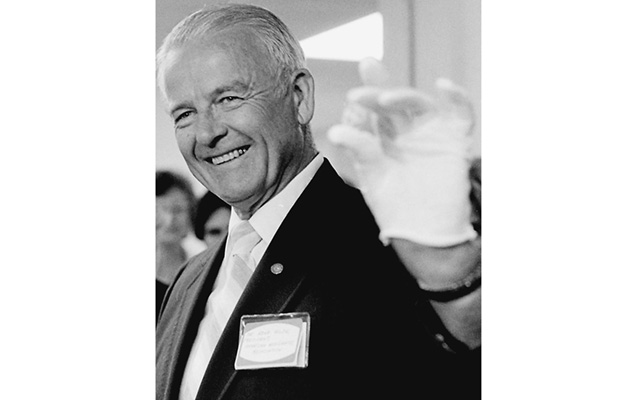 Shortly after 9:30 a.m. on July 1, 1982, Mint Director Donna Pope and Denver Mint Superintendent Nora Hussey led attendees at the ceremonial striking of the Uncirculated George Washington commemorative half dollar from the press briefing room down the corridor at the Denver Mint.

I noticed that Superintendent Hussey slowed her pace and turned to talk with American Numismatic Association President Adna G. Wilde Jr., who was a couple of steps ahead of me. As we approached the wide stairs leading to the lower coin production area, I caught up with Wilde and we descended the stairs together. He had a big smile on his face and told me the superintendent had just invited him to strike a coin.

He talked excitedly, like a child opening gifts on Christmas morning (highly unusual for the normally unflappable retired Air Force colonel). He said he thought he would be the first ANA president since Farran Zerbe to strike a commemorative coin. (Zerbe struck a Panama-Pacific International Exposition commemorative gold $50 coin at the San Francisco Mint in 1915.)

By 10 a.m. Pope, members of her Washington staff, and Swiatek were scurrying from the Denver Mint building and headed to the airport.

Swiatek, recently recalling the mad dash, noted that they arrived at the airport to find that there would be a flight delay. Pope called the San Francisco Mint superintendent, and the ceremony for striking the Proof version was rescheduled for an hour later at 3:30 p.m. Pacific Time.

Swiatek said one of his vivid memories from the San Francisco ceremony was hearing President Reagan on the phone with Mint Director Pope, giving the order to strike the first Proof version of the George Washington commemorative. Director Pope struck all five Proof coins.

As soon as the ceremony ended, Swiatek rushed to call Coin World to provide details of the San Francisco Mint event and to put his roll of 35-millimeter film on an overnight delivery service.

Meanwhile, I had taken a late afternoon flight from Denver via Chicago to Dayton. I used the time in flight and in airports to write my story by hand on a legal pad. I arrived home after midnight, but was at the office by 5 a.m. on Friday. The technician in our photo lab came in early to process and print the pictures we would use to illustrate the story. We made all of our deadlines, and the issue dated July 14, 1982, containing the historic coverage went to press at 1 p.m., with a confident Margo Russell exclaiming, “I knew we could do it!”