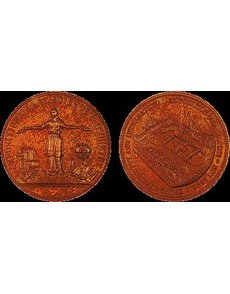 The HK-284 medal, graded Mint State 66 brown by Numismatic Guaranty Corp., is the only example of HK-284 certified by NGC.

The FUN convention will be held at the Orange County Convention Center in Orlando.

So-called dollars are medals approximately the size of a silver dollar struck to commemorate a historical U.S. event.

Many of the pieces offered in the Shevlin sale are pedigreed to the Alfred J. and Jacque Ostheimer Collection assembled in the 1950s and 1960s.

Of the 75 lots to be offered, 50 are pedigreed to the Ostheimer Collection.

Lots will be available for viewing at the FUN convention Jan. 5 and 6 and online at www.So-CalledDollar.com.

The Ostheimer collection contains more than 70 plate coins from the original So-Called Dollars book in 1963 by Harold E. Hibler and Charles V. Kappen and the 2008 revised update of the same name, by Tom Hoffman, Dave Hayes, Jonathan Brecher and John Dean.

Lots from Shevlin’s previous so-called dollar medal sales that include pieces pedigreed to the Ostheimer Collection are archived on Shevlin’s website, along with color photos of each specimen and the prices realized.

For more information visit online at www.So-CalledDollar.com, telephone the firm at (916) 955-2569 or email the business at SoCalledGuy@Hotmail.com. ¦