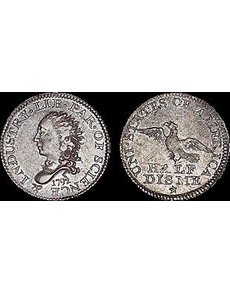 According to ANA officials, the estimated market value in 2008, based on records and images of the missing items, was $420,590.

ANA President Tom Hallenbeck said Jan. 19 that law enforcement and ANA officials had been aware of the additional missing items Jan. 12, but chose not to disclose the information at the time in order to avoid confusion.

“We did not disclose the list initially because we were focusing on items Wyatt Yeager had admitted stealing,” Hallenbeck explained.

Yeager, the museum’s collections manger from Jan. 3 to March 21, 2007, entered a guilty plea Jan. 12 in Federal District Court in Wilmington, Del., to the theft of some 338 historically significant and rare coins and patterns valued at nearly $1 million.

The newly disclosed missing and presumed stolen items include six rare U.S. Colonial coins, eight rare U.S. coins, eight Mexican rarities, one pattern piece from the Netherlands, the silver bar and the gold nuggets. The list of missing coins can be found at http://www.money.org/ana_custom/MissingCoinsList.aspx.

The most high-profile U.S. coin on the list is a 1792 silver half disme, donated to the ANA by an anonymous benefactor in 1978.

Robert W. Hoge, as ANA museum curator, described the coin in his “Curator’s Corner” column published in the August 1991 The Numismatist as “one of the most cherished coins in the ANA’s cabinet” and also as “among the most important in American numismatic history.”

Approximately 1,500 half dismes were struck in July 1792. They were the first coins struck to conform to the specifications required in the Act of April 2,1792, the original statute that established the United States Mint and regulated U.S. coinage. Modern researchers estimated that approximately 275 (in all conditions) of 1792 silver half dismes survive today.

Hoge described the ANA’s half disme as “an attractive, Extremely Fine specimen with slightly iridescent toning.”

Among the six Colonial rarities missing is a 1783 John Chalmers shilling, Short Worm variety. According to the ANA the silver coin grades EF-45+.

Seven of eight missing Mexican rarities on the new list are patterns. According to Mexican specialist Don Bailey, the 1917 silver 1-peso pattern struck at the Guerrero Mint, graded EF, is “extremely rare.”

Bailey said they alerted ANA museum officials as to the importance and rarity of the two unpublished patterns and other patterns found with them. Bailey and Flores graded the rare copper patterns as Mint State.

The 73-pound silver bar is from the Potosi Mint and dates from 1656. It was salvaged from the shipwreck of the Spanish galleon Nuestra Senora de las Maravillas, the admiral’s ship in the 1654-1656 Spanish treasure fleet that was lost on Jan. 4, 1656, in the shallow waters of Little Bahama Bank. The shipwreck and treasure were discovered by Robert Marx in August 1972 and then salvaged a second time by Herbert Humphreys in 1987.

The missing five gold nuggets are estimated to have a total weight of half an ounce.

Law enforcement officials are continuing to investigate the theft of items from the museum. ANA officials have requested anyone having information about any of the coins identified as stolen and missing from the museum to contact the ANA at 719-482-9841. ¦

This article was updated to add a link to the missing list of coins.