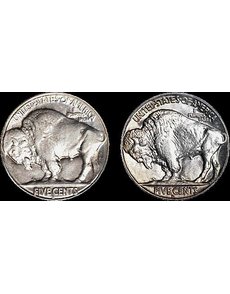 Of two similarly graded Mint State 1926-D Indian Head 5-cent coins, one has a flatly struck reverse, left, with few details on the high points, and the other, right, has a sharp strike with excellent details. Such differences are not reflected in market prices.Images courtesy of American Numismatic Rarities.

A motivational speech of years ago inspired audiences by saying that in life there are acres of diamonds at one’s feet, but one needs to look for them and pick them up. And so it is with “cherrypicking” for value in numismatics.

Today, the label on a typical certified coin gives the date, Mint mark (if any) and numerical grade. Often left unstated are features that could add value to a coin. A curious situation offers many opportunities:

Only a few series have modifiers added to the grade to indicate sharpness of strike. Jefferson 5-cent coins with full steps on Monticello (FS) are in this category. Winged Liberty Head dimes are described as having full bands, or FB, crossing the fasces on the reverse, if a coin meets this requirement.

The addition of an FS, FB, FH, or FBL descriptor to a grading service holder’s label can multiply the value of a coin in the marketplace.

A common 1945 Winged Liberty Head dime in Mint State 65 grade is worth, plus or minus, $30. A 1945 dime with full bands is worth thousands of dollars, as only a few have this sharpness feature.

The “acres of diamonds” aspect is that most other coin types can be classified by sharpness. Among Indian Head 5-cent coins, some are weakly struck, some are sharp and most are in between.

The 1926-D Indian Head 5-cent coin is usually weak, but if you find a sharp one it is likely to cost no more!

Many circulation strike Barber quarter dollars and half dollars are lightly struck on the reverse at the upper right of the shield and on the leg to the right, but sharp ones cost no more.

Liberty Seated half dimes, dimes, quarter dollars, half dollars and dollars with each star center sharply struck cost no more than ones with some stars weakly defined.

Isn’t this amazing! Think of the potential!