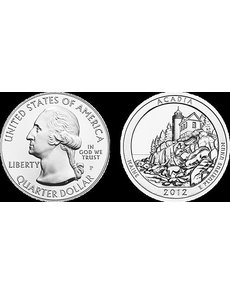 The coin’s initial price is $204.95, but pricing is subject to change based upon fluctuations in the spot price of silver. The coin has a maximum mintage of 25,000 strikes.

The reverse of the Acadia National Park coin depicts a view of the Bass Harbor Head Lighthouse atop Acadia’s rough coastline.

The design was selected from five sketches presented to the Commission of Fine Arts and Citizens Coinage Advisory Committee during the October 2010 meetings of the two federal review panels.

The Uncirculated America the Beautiful 5-ounce .999 fine silver coins are collector versions of those issued through the America the Beautiful silver bullion coin program. Unlike the bullion version, the Uncirculated strikes feature the P Mint mark of the Philadelphia Mint. The bullion coins have no Mint mark, though they, too, are struck at the Philadelphia Mint.

Each Uncirculated coin is enclosed in a protective capsule and presentation case, and is accompanied by a certificate of authenticity.

The designs featured on the 5-ounce silver Uncirculated and bullion coins duplicate those appearing on each corresponding circulating quarter dollar issued through the America the Beautiful Quarters program. The 5-ounce coins are denominated as quarter dollars as well.

Orders for the Acadia National Park 5-ounce coin are accepted at the Mint’s Web site, www.usmint.gov/catalog, and by telephone at 800-872-6468. Hearing- and speech-impaired customers with TTY equipment may order at 888-321-6468.

A $4.95 shipping and handling fee is added to all domestic orders. ¦