A year without coins 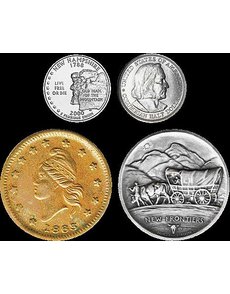 The year 2012 marks the sesquicentennial or 150th anniversary of the greatest monetary disruption in American history.

The scene began in late December 1861 when the outcome of the Civil War, earlier thought to be an easy win for the North, was in serious doubt. With uncertainty in the air, citizens began to hoard gold coins.

In March 1862 the boom dropped when the Treasury Department launched its legal tender notes. These pieces of paper, eventually of denominations from $1 to $1,000, were not redeemable in “hard money” such as gold and silver coins, but could only be exchanged for other paper. Perturbed as to what might happen next, the public grabbed every silver coin in sight. By early summer, the only federal coins in circulation were copper-nickel cents, even though the federal Mint continuing striking cents and the silver and gold coins.

In the second week of July, cents disappeared as well. Now no United States coins circulated at all, all being hoarded as quickly as they were released to banks. To fill the gap, a panorama of money substitutes appeared. The Treasury Department declared that postage stamps were legal tender. Cent-size copper and brass tokens were issued by merchants and others — bearing political or advertising inscriptions. Paper scrip notes of values from a cent to 3 and 5 cents were printed, as were some of slightly higher denominations.

Soon the government issued postage currency — scrip notes bearing stamp designs — succeeded in 1863 by fractional currency. John Gault, an inventive New Yorker recently moved from Boston, in 1862 patented encased postage stamps — with stamps of values from 1 cent to 90 cents mounted in a brass frame with a clear mica pane on the front.

The monetary situation brightened slightly in 1863 when Indian Head cents began to reappear, followed in 1864 by bronze 2-cent pieces, in 1865 by copper-nickel 3-cent pieces and in 1866 by copper-nickel 5-cent pieces. It was not until April 1876 that silver coins were again seen, and gold coins remained out of sight until December 1878.

The coinless year of 1862 remains absolutely unique in American history. The hobby should celebrate the 150th anniversary of this remarkable year with enthusiasm.