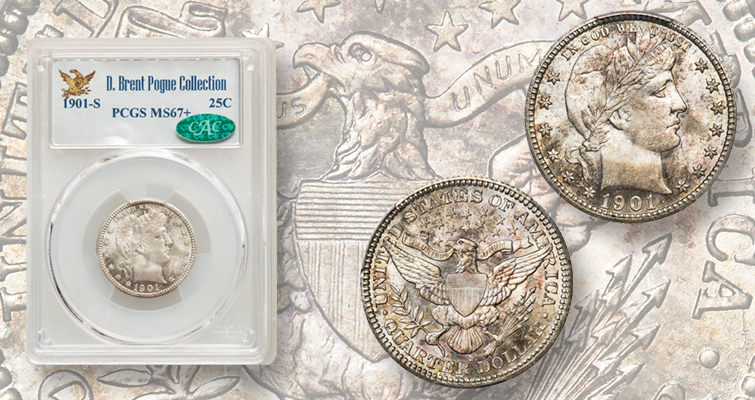 A top-quality MS-67+ 1901-S Barber quarter dollar with a green CAC sticker that brought $180,000 in March at the final D. Brent Pogue auction will be offered at Heritage’s Sept. 18 Premier Session auction in Dallas. 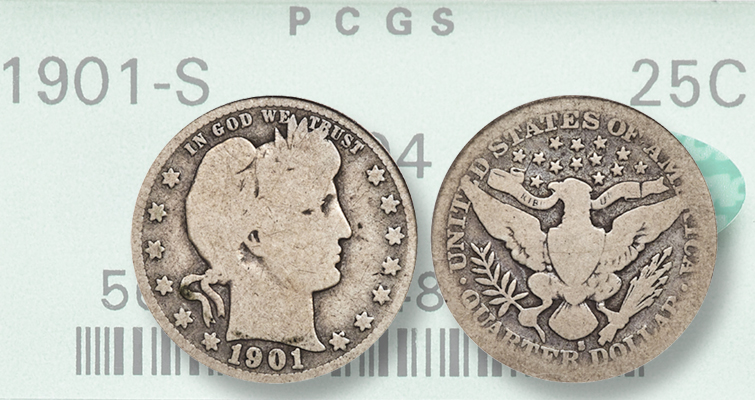 This Good 4 1901-S Barber quarter dollar has a green CAC sticker and is a solid representative of the key-date issue, with an especially nice obverse.

The auctions at its new Dallas-area headquarters replace the firm’s sales originally set to accompany the September Long Beach Expo in California, which was canceled.

Collectors chasing titles and honors with their registry sets might find a 1901-S Barber quarter graded Mint State 67+ by Professional Coin Grading Service and bearing a green Certified Acceptance Corp. sticker to their liking. While not the lowest mintage of the Barber quarter dollar series — that title is held by the issue of 40,000 1913-S Barber quarters — the 1901-S quarter dollar is the key to the series with a modest mintage of 72,664 and a surprisingly low survival rate as most entered circulation and enjoyed long lives as tools of commerce.

This example emerged on the market when offered by Heritage at its June 2001 Long Beach auction, where it was presented as a single-coin lot, then-graded PCGS MS-67 in an era before “Plus” grading. It sold for $77,625. It was once part of a four-coin set with a dime, quarter dollar, half dollar and silver dollar obtained by a visitor to the San Francisco Mint and held in the family.

Heritage praises its bold strike, writing, “A simply extraordinary coin irrespective of date, the surfaces are intensely lustrous with a richly frosted texture. Swirls of dove-gray, silver, lilac-purple, and antique-golden patina intermingle over both sides.” It is among the very finest-known, bested only by one graded MS-68+ that sold for $327,750 more than a decade ago at a Bowers and Merena auction.

Quality within the grade

Still-discerning collectors of more modest budgets will find a 1901-S Barber quarter dollar graded Good 4 by PCGS and possessing a green CAC sticker of interest. It is housed in an old PCGS holder that the grading service calls a Generation 3.1 slab, which was used from March 1993 to September 1998. This type is characterized by its solid pale green, nonperforated label set in a two-piece interlocking plastic slab with the PCGS logo in the plastic at lower right.

The “Red Book” writes the standard for Good 4 as “Date and legends legible. LIBERTY worn off headband,” and the market considers the merging of letters into the rim on the reverse acceptable in the Good grade for this issue.

Today’s buyers make significant price separations for small increases in grade, with Fair 2 examples trading for around $1,500, solid About Good 3 pieces at the $2,500 level, and even a typical Good 4 example can be found with some luck at auction below $3,000. Since these lower-grade coins can often have some issues consistent with long periods in circulation, collectors value the confidence that a CAC sticker provides that a coin is nice for the grade. CAC-stickered 1901-S Barber quarters in Good 4 can sell for $4,000 and up. 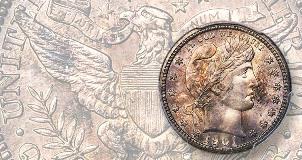 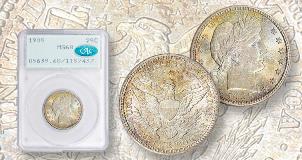 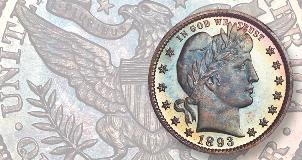