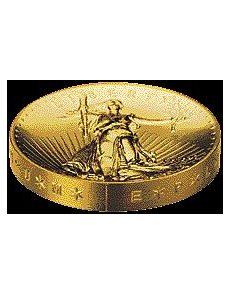 The 2009 Saint-Gaudens, Ultra High Relief gold $20 double eagle possesses raised lettering on its edge, the same as its 1907 predecessor.

When we think of a coin, we typically imagine two sides: obverse (or heads) and reverse (or tails). However, including the edge, a coin actually has three sides.

Usually the edge serves a coin as a frame serves a portrait.

Before we delve into the various types of edges in U.S. coinage, we might think about how obverse and reverse of a coin should combine to tell a story or depict a moment.

One of the loveliest U.S. coins — the 1926 Oregon Trail Memorial commemorative half dollar — depicts an ox-drawn pioneer wagon heading west in sunset. The reverse is a Native American superimposed on a map of the United States, facing east, with his hand raised as if to say “Halt!”

An exquisite modern coin, the 2012 Star Spangled Banner silver dollar, features Lady Liberty on the obverse waving the famous 15-star flag that inspired America’s national anthem at the 1812 Battle of Baltimore. The reverse is a stylized modern flag, symbolizing that we still embrace the same values.

Both coins have a reeded edge, or series of grooved lines, which were commonly placed on coins in the distant past as an anti-theft device to indicate whether someone had been shaving away silver or gold.

Many coins have plain edges, like a smooth frame. Some coins have vined and gripped edges to enhance beauty or handling. A few edges qualify as ornate frames.

Some of America’s earliest coins, such as the Liberty Cap cent, or the Flowing Hair and Draped Bust dollars, possess edge lettering. When we hear that term today, however, we usually think of Presidential dollars.

Incused edge inscriptions E PLURIBUS UNUM and IN GOD WE TRUST (in addition to the date and Mint mark) are found on the 2007 to 2008 Presidential dollar coins.

Because some of these coins were produced missing edge lettering, and because of a mistaken concern by many Americans that the motto was otherwise missing, Congress had the inscription IN GOD WE TRUST moved from the edge to the obverse beginning in 2009.

Edge lettering can be incuse, or impressed into the coin’s metal, as is the case with Presidential dollars. Another type of edge lettering is raised above the surface.

In the same year that IN GOD WE TRUST was removed from the edge of Presidential dollars, the U.S. Mint produced a Saint-Gaudens, Ultra High Relief gold $20 double eagle, with the same raised edge lettering as existed on Augustus Saint Gaudens’ 1907 gold $20 double eagle. The inscription E PLURIBUS UNUM was placed there with 50 stars for each of the states (as opposed to the 46 stars on the original coin).

The raised edge lettering of the original 1907 coin and modern 2009 Ultra High Relief coin graces designs that rank among the most beautiful coins in the world.

You will appreciate your collection more by understanding the three-sided canvas of a coin: An obverse that foretells a story, a reverse that concludes it, and an edge that frames it for posterity.