A tale of two dollars 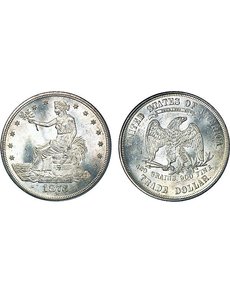 This 1873 Trade dollar could be spent contemporarily, but a few years later, banks wouldn’t take them at all. Why?

Last week I mentioned some odd and curious coin facts — such as that “nickels,” that is, copper-nickel 5-cent pieces, should really be called “coppers,” as they are 75 percent copper and only 25 percent nickel.

I also related Louis E. Eliasberg Sr.’s anecdote that in 1932, for a citizen to own double eagles was legal, bottles of whisky illegal. In 1934, the situations were reversed — turn those gold $20 double eagles in to Uncle Sam or face prosecution, but buy all the whisky you want! Now, for this week, can you follow this?

The time is spring 1873. John Doe, who lives in San Francisco, has two recently minted silver coins — a Seated Liberty dollar and a Trade dollar. He desires to have some small change and goes to a local bank to ask for dimes. In short order, a cashier exchanges the two dollars and gives John 20 dimes. John spends them for newspapers, beer and other things.

He takes another Seated Liberty dollar and Trade dollar from his pocket and mails them to Jane Doe, his niece in New York City. Jane takes them to a bank and asks for some dimes. “I am so sorry. We don’t have any dimes at all, and haven’t since the spring of 1862,” the teller replies.

Jane puts the two coins away. In 1879, she tries again. This time the teller replies: “I can give you 10 dimes for the silver dollar. We have several bags of dimes. I’ve never seen so many! However, I am sorry to tell you that the Trade dollar is not money anymore, and I am not allowed to take it.”

Now the rest of the story. In 1873, American silver coins were in circulation in California and federal paper money was not wanted. It was a “hard money” economy. Legal tender notes were around, but sold at a discount in terms of gold and silver coins. Dimes were aplenty.

In 1873, in New York, no silver and gold coins were in circulation. They had been hoarded since early 1862, during the Civil War, when Uncle Sam flooded the country with legal tender notes, which were not redeemable in coin. After the war ended, the hoarding continued, as the economy remained uncertain.

It was not until April 1876 that silver coins and legal tender notes achieved par and could be freely interchanged. Shortly afterward, on July 22, 1876, the government demonetized Trade dollars, rendering them useless in commerce. They were only worth melt value, a deep discount.

Fast forward to the Coinage Act of 1965, which stated that any and all officially minted coins were legal tender. The Trade dollar became a real coin once again!