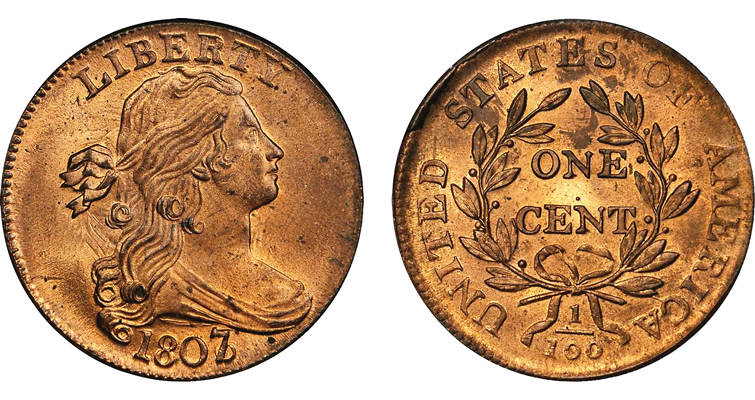 While not a rare issue or variety, this remarkably fresh 1807/6 Draped Bust large cent graded MS-66 red by PCGS with a green CAC sticker brought $470,000 at the Stack’s Bowers auction at the 2015 ANA show.

The American Numismatic Association World’s Fair of Money in August and the January Florida United Numismatists convention act as guideposts for the rare coin market.

Both shows feature huge auctions, massive bourse floors with an active blend of wholesale and retail dealers, robust on-site grading, and a healthy crop of educational opportunities to bring collectors to the show and keep them engaged.

This summer’s ANA show was again held in suburban Chicago, with collectors and dealers alike seeming to share in “Rosemont fatigue.” That should be resolved in 2016 when the ANA moves the show to Anaheim, Calif., with Denver slated in 2017 and Philadelphia in 2018.

Both Stack’s Bowers Galleries and Heritage Auctions held official ANA auctions during the show, with online sessions continuing after the close of the convention.

The results of these auctions were mixed with many of the top rarities not meeting reserves. Some of this may be attributed to wealthy buyers being extremely selective in their purchases, with Stack’s Bowers upcoming Pogue Collection sales looming and several massive collections that have introduced thousands of rare coins to market in the past three years.

That being said, several great collections of top-quality coins in specialist areas, such as Heritage’s offering of Proof Coronet gold $10 eagles from the Trompeter Collection and the Duckor Family Collection of 19th century gold dollars garnered attention. Still, the auctions had an absence of name-brand massive rarities to capture mainstream news attention and bring additional visitors.

More encouraging were the strong results for attractive, well-priced collector coins in the $750 to $5,000 range, showing that collectors are continuing to make strategic additions to their collections.

This year’s ANA show lacked a robust new U.S. Mint product like last year’s 2014 Kennedy gold half dollars. The Mint did not offer any of its new 2015 American Liberty, High Relief $100 coins at the show, and many dealers were selling examples for very modest premiums over their issue price — understandable considering the coins are still available from the U.S. Mint and don’t seem to be nearing a sellout point.

Great coins continue to bring more money than ever as buyers are willing to pay previously unheard of prices for examples of coins that are the finest known. Take the top lot of the ANA auctions: Stack’s Bowers offering of an 1807/6 Draped Bust cent graded Mint State 66 red by Professional Coin Grading Service with a green Certified Acceptance Corp. sticker.

It’s not a rare issue, or a rare variety, but this coin is legendary for its original Mint color that looks closer to a mid-20th century cent than one from the first years of the 19th century. It sold for $470,000 and that price — while huge today — may seem like a bargain in a generation.