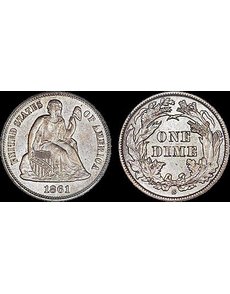 The 1861-S Seated Liberty dime is a key date to the series, with Uncirculated examples costing multiples of highest circulated grades. The PCGS Mint State 61 example shown sold at auction in September 2010 for $5,750.

I can’t say that I’ve ever looked twice at a Seated Liberty dime. But a recent check of mintages, survival estimates and catalog values convinces me it’s a sleeper’s sleeper.

The series begins with the stunning 1837 Seated Liberty, No Stars Obverse dime. The one-year-type has a Philadelphia Mint mintage of 682,500 and a New Orleans Mint mintage of 406,034.

These mintages, which are about average for dimes minted up until then, mark the 1837 Seated Liberty, No Stars Obverse dime as a fairly common 19th century piece. Enough exist to meet demand.

In Good condition, the more common 1837 Seated Liberty Large Date dime has a Coin Values value of $45. Even Mint State 60 pieces catalog for just a shade over $1,000. Professional Coin Grading Service estimates 1,700 survive in all grades, with 300 grading MS-60 and above.

During the Civil War, the series becomes really interesting. Mintages were comparatively small and most of those coins were promptly melted. Few survive, but their values are moderate.

The 1861-S Seated Liberty dime has a mintage of 172,500. PCGS estimates 250 survive in all grades, with only 10 Uncirculated pieces. In Good condition, the coin has a Coin Values value of $50. Uncirculated pieces, when you can find one, catalog for upwards of $5,000.

In 2010 and 2011, 1861-S Seated Liberty dimes made 10 appearances at major actions, and most of those coins were clustered at the Very Good to Very Fine grade range. Prices for well-worn pieces are inexpensive, but the wait for one to come along can be long.

The 1866 Seated Liberty dime has a mintage of just 8,000 pieces. PCGS estimates 400 survive, with 50 in Uncirculated condition. The piece has a Coin Values value of $400 in Good condition and just $1,700 in MS-60. A quick check of major auction houses shows that 11 have appeared at auction during the past two years.

The 1866 dime has a low mintage and is priced as a rarer piece in lower grades. In Uncirculated, though, it is fairly common and trades at a much lower price than high-mintage coins that did not survive as well. If this was a 20th century piece it would sell for tens of thousands of dollars.

Of the 264,000 minted, PCGS estimates more than 10,000 survive, and 700 of those are Uncirculated. Hundreds appear at auction every year. Dozens can be found without much looking on bourse floors.

What a difference a century makes.