A rush to be first? Coin journalism in a 24-hour news 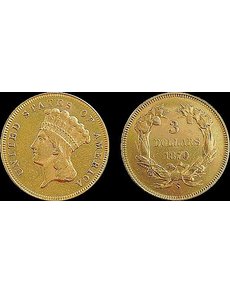 A purported 1870-S Indian Head gold $3 coin in a June 2 auction quickly made the mainstream news before anyone checked on the authenticity of the coin. The auctioneer eventually withdrew the coin from the auction.

In today’s fast news cycle, there’s a lot of pressure to be first. Today, literally anyone with a computer and a connection can present and share a story. The recent proliferation of micro-blogging sites like Twitter even removed the need for editing and concerns about readability, allowing direct and nearly instant international distribution of content (as long as it is under 140 characters).

There’s a robust and ongoing debate on where this instant expectation of news is taking journalism. While there’s certainly much to be said for the increased amount of news available, many believe that this rush to be first has resulted in a general loss of quality.

The coin hobby saw an example of this with a May 16 press release that a small auction house in Georgia was offering an extremely rare 1870-S Indian Head gold $3 coin. It was the second example ever made available to collectors and was promoted as the star of an otherwise modest June 2 auction, carrying an estimate of $2 million to $4 million.

Fox News ran with the story, which was shared hundreds of times through social media channels and reprinted in dozens of mainstream outlets. Steve White — owner of the Four Seasons Auction Gallery in Alpharetta, Ga. — told FoxNews.com, “It’s almost folklore to have this kind of rare coin be around.”

The mysterious coin was coupled with a wild provenance in that, allegedly, it was discovered glued in an antique San Francisco souvenir book, found there by a European tourist visiting a San Francisco bookshop in 1997. The story seemed tailor-made to capture mainstream media attention. Nearly all of the news stories barely flirted with the tricky subject of the coin’s authenticity.

It seemed too good to be true. So, before running the story, of course we did some checking with experts. They all quickly opined in near-unison that the new discovery was likely a fake. The coin was soon withdrawn from the sale, only a few days after its existence was announced to the world, as the auctioneer recognized the “need for complete independent verification of the coin and its authenticity.”

Perhaps fact-checking and trying to ascertain the truth of a story is old-fashioned, an established media convention that is seen as unnecessary today. However, one hopes that there still remains a valid place for news that is vetted and thoughtfully presented and considered from a coin-collecting perspective.

I hope that you agree.