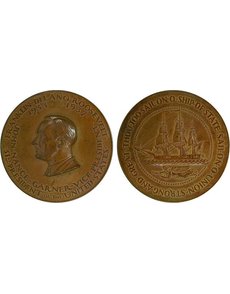 The 77-millimeter bronze medal struck by Medallic Art Co. for the first inauguration of Franklin Delano Roosevelt as president is eagerly sought by collectors today, selling for up to 50 times the original issue price.

The first inauguration of President Franklin Delano Roosevelt, on March 4, 1933, was an occasion of high drama. The first Democratic president since Woodrow Wilson was coming into office as the United States was poised on the brink of economic collapse.

Roosevelt would soon launch the blizzard of federal relief and anti-Depression measures that would make his New Deal famous.

His confidant, Adm. Cary T. Grayson, was appointed chair of the Inaugural Committee with former U.S. Mint Director Robert W. Wooley as medal chairman. Determined that the inaugural medal be a work of art, they commissioned 47-year-old sculptor Paul Manship (born 1885, died 1966) to create it. He had already created the 1914 New Netherland Tercentenary medal for the Circle of Friends of the Medallion and the Society of Medalists’ controversial second issue of 1932, the Hail to Dionysus medal, which riled Prohibitionists. The committee also determined that the medal would be struck at the Bureau of the Mint.

Manship’s obverse for the 1933 Roosevelt medal bore a small but exceptionally high relief bust facing left in a concentric two-line legend, franklin delano roosevelt, 31st president of the united states, 1933-1937, john nance garner — vice president. The reverse bore the USS Constitution under full sail, guiding angel below. The legend was from Longfellow, thou too sail on o ship of state, sail on o union strong and great.

Using dies cut by Medallic Art Co. of New York, the Mint struck just under 1,500 in bronze for sale at $2.50 each. A total of 581 went unsold because, as Wooley told FDR, “You closed the banks and I wouldn’t take checks!”

A little-known but vastly rarer variety also exists, struck by Medallic Art Co. itself with the two sets of dies it made for the U.S. Mint. The company wanted to strike the whole issue, but did not gain the contract.