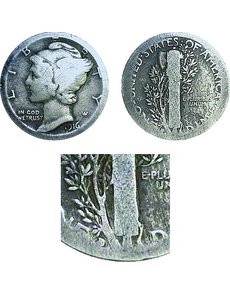 The illustrated piece has the reverse rotated to 11:00, proving that it cannot be a genuine 1916-D Winged Liberty Head dime. Could the Mint mark have been added and the piece artificially worn to blend the D into the surrounding area?

Every now and then a coin arrives in the ANACS grading room that does not allow for a quick determination. The 1916-D Winged Liberty Head dime shown here was definitely one of these coins. In fact, while I am absolutely certain that the coin is not genuine, I am still not completely certain of the method used in making the fake.

The easiest diagnostic with a heavily worn 1916-D dime is die rotation. Four die pairs were used to strike the 264,000 genuine pieces, and each die pair has a distinct die rotation.

To determine the die rotation of a U.S. coin, you align the obverse properly. Holding the coin at 3 o’clock and 9 o’clock, you then flip the coin over to the reverse and observe the alignment of the reverse.

This is easiest to do if the coin is held securely in a 2-inch by 2-inch cardboard holder, as you can keep the obverse aligned precisely while you turn the coin over.

The four genuine die pairs were all slightly rotated, ranging from 11:45 to 1:00. The coin in question has the reverse rotated to 11:00, proving that it cannot be a genuine 1916-D dime. Now all we had to do is determine the method used to produce it.

The vast majority of fake 1916-D Winged Liberty Head dimes are made by adding a fake D Mint mark to a genuine 1916 Philadelphia Mint-struck dime that bears no Mint mark. Others are made by taking a genuine 1916-S dime and altering the S Mint mark to a D. On rare occasions the 8 on a genuine 1918-D dime will be altered to a 6, and even less often a fake 1916-D dime will be produced by splitting a 1916 Philadelphia dime and a common date Denver Mint dime into two halves, then piecing the 1916 obverse and the D Mint reverse together.

The D Mint mark on our suspect coin did not appear to be added, and the date likewise appeared normal. We were unable to locate any type of seam on the edge or rims of the coin, and the coin had a normal “ring” when tapped. The rims on the coin were unusually wide, and appeared to have been flattened in some way.