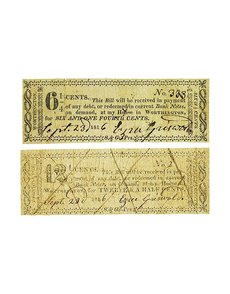 Ezra Griswold, a Worthington, Ohio, tavern keeper, issued a number of notes in 1816, including these two fractional denominational examples, a 6¼-cent note and a 12½-cent note.

I’ve got a new numismatic quest: paper money printed by the Borough of Columbus, Ohio, in 1816.

In researching a project to celebrate the City of Columbus’ bicentennial next year, I’ve been reading just about everything I can get my hands on about the city’s history.

On Page 469 of the second volume of the 1,800-page, 1892 History of the City of Columbus Ohio, I found a one-paragraph mention of the Columbus bills. I found no other mention of the issue in earlier or later histories and have just begun the search of contemporary documents.

Columbus was on the edge of the frontier in the early 1800s. Money was scarce, and much commerce was carried on by barter, with whiskey being especially prized.

On May 24, 1819, Lee reports the borough had redeemed $331.75 worth of the bills. Nothing more is said about the bills, though the implication is they were called in.

Because the bills were produced quickly, it’s likely they were printed locally. Columbus had two printers in 1816; one of them produced small-denomination bills for Ezra Griswold, a nearby tavern keeper, about that same time.

Griswold’s bills, which are readily available for just a few dollars each, are entirely typeset. Printers dingbats form borders and the denomination is set in extra large type. I suspect the Columbus bills looked much like them.

The Columbus public library has copies of one of two newspapers that were printed in Columbus in the 1810s, but not every issue is represented.

The library has only a couple issues from The Columbus Gazette of 1816, and none from August or September. Spring 1819 issues make no mention of the Columbus notes, though one long article listed 29 counterfeit notes and a handful of Ohio notes that were redeemable in specie.

The May 27, 1819, issue also has a brief item taken from a Philadelphia paper about the laying of the cornerstone at the Second Bank of the United States building. The cornerstone had a lead case that housed “a glass vase containing several of the gold, silver and copper coins of the U. States.”

If I can’t find a Columbus bill, I wouldn’t mind having that vase.