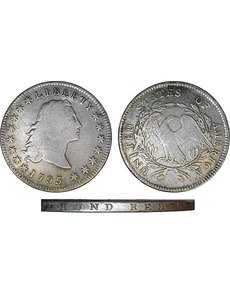 A few of my previous columns discussed the improving quality of counterfeits coming from Asia.

The fake 1795 Flowing Hair silver dollar shown here is a good example of this trend. At first glance, it is a perfectly acceptable-looking early dollar in circulated condition. The surfaces and color of the coin look like a typical cleaned example, which is not unusual for early U.S. silver coins.

This fake is an accurate reproduction of the Bowers-Borckhardt 27 variety (Silver Dollars & Trade Dollars of the United States, A Complete Encyclopedia by Q. David Bowers, with Mark Borckardt), one of the most common die varieties for this design.

Interestingly, the easiest marker for this die pair, a die scratch in the left obverse field between the top hair curl tip and the star at 9 o’clock, has vanished on the counterfeit. While this marker may have accidentally disappeared during the transfer process, it is also possible that the counterfeiter intentionally removed it from the fake die, thinking it was a defect.

Using magnification, the finer details remaining on the fake are a little fuzzy. However, the easiest diagnostic for detecting this counterfeit is the edge of the coin. On a genuine Flowing Hair dollar, the edge is lettered HUNDRED CENTS ONE DOLLAR OR UNIT, with ornaments between the words. On the fake, the word HUNDRED is spaced as if it were two words, HUND RED. This same edge collar was also used on other early dollar fakes, including 1795, 1796 and 1797 Draped Bust dollar counterfeits.

One last diagnostic to keep an eye on is the contradiction in condition between the coin’s surfaces and its edge. While the coin appears to be well circulated, the edge lettering looks like it belongs on a coin that grades About Uncirculated or higher. With any suspicious coin, you should always check for abnormalities like this.

We must assume that the improvements with these counterfeits will continue. With the fake shown here, the counterfeiter has accurately reproduced the design, the weight, the metal content and the basic look of a genuine coin.

Once counterfeiters realize that these counterfeits can be detected with a quick glance at the edge of the coin, they should begin to make the necessary corrections, and our job gets a little bit harder.