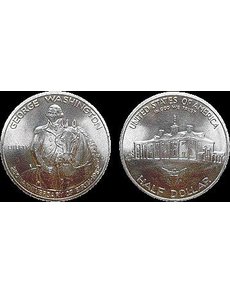 Last month’s installment of “Making Moderns” discussed the low-mintage Uncirculated 2011-D U.S. Army commemorative half dollar, of which just 39,461 were produced. It seems fitting this month to discuss the coin that signaled the rebirth of the modern commemorative coin program: the 1982 silver half dollar commemorating the 250th anniversary of George Washington’s birth.

Its production marked the restoration of the U.S. Mint’s commemorative coin program, which began strong in 1892 with the World’s Columbian Exposition half dollar and ended with a whimper in 1954 with the production of the final Booker T. Washington-George Washington Carver half dollar.

During congressional hearings on the bill to authorize the 1982 commemorative half dollars, legislators heard testimony from George Hatie, then president of the American Numismatic Association, and coin dealer Anthony Swiatek. Congress agreed with the Treasury Department’s suggestion that the U.S. Mint be allowed to use leftover silver from its Eisenhower dollar program.

The authorization of a new silver commemorative half dollar presented a sterling opportunity for the newly-appointed chief sculptor-engraver Elizabeth Jones to design a U.S. coin. She modeled her half-length equestrian portrait of Washington after a Thomas Sully portrait of Washington on horseback, and the reverse depicts Washington’s plantation home at Mount Vernon, Va.

For today’s collectors, the huge contemporary demand for the 1982 George Washington half dollars means that large quantities exist today and that the issue is generally available for little more than bullion value, or around $15.

The Denver Mint struck 2,210,458 Uncirculated half dollars while 4,894,044 Proof half dollars were struck at the San Francisco Assay Office.

This issue is unusual in the modern era in that Mint State 69 is the highest collectible grade for Uncirculated coins. Certified examples in this grade sell for around $200. In contrast, Proof 70 coins are relatively hard to locate. In 2002, an example graded Proof 70 Deep Cameo by Professional Coin Grading Service realized $1,063.75 at auction.

Ten years later, the PCGS population in this grade has expanded from 13 coins in 2002 to 181 coins today, and the price has come down considerably. A PCGS Proof 70 Deep Cameo example sold in January for $130 in an online auction.