From the Memory Bank: Gunfire fails to stop nominations 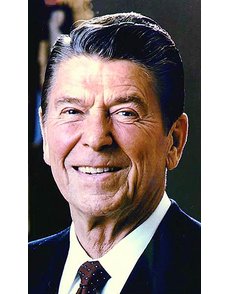 Donna Pope and Angela Marie “Bay” Buchanan had a lot in common. Both had tirelessly worked in 1980 to elect Ronald Reagan to the presidency. Both were rising stars within the Republican Party. And both shared the president’s fiscal conservatism.

One of President Reagan’s earliest nominees (Feb. 12), Buchanan immediately began to build her team at Treasury, hence her phone call to Donna Pope in early March 1981 about the Mint director’s job. Within days of Buchanan’s March 17 U.S. Senate confirmation as treasurer of the United States, Pope traveled to Washington, D.C., to meet with her and other senior officials at Treasury and officials at the White House. All of the meetings went well. Pope returned to Ohio with the knowledge that the president would soon submit her name for the 33rd director of the United States Mint.

Upon returning home to Ohio, Pope began to get her private life organized for a move to Washington. However, she had to do so with the utmost of care. She could not go public with the news. She had to wait for the White House to announce her nomination.

In a recent conversation, Pope shared that after her trip to Washington, she awoke every day anticipating that it would be the day of the announcement.

Then came Monday, March 30, 1981. Around 3 p.m., news bulletins began to saturate the television airwaves. All of the networks were reporting that President Reagan had been shot and that he was undergoing surgery. Pope said she sat, in a state of disbelief, watching the coverage, waiting to hear every detail. Not only was the life of her hero in jeopardy, her future was also on the line.

The first shots wounded three others.

The sixth bullet ricocheted off the side of the armored limousine and hit Reagan in his left underarm. Doctors reported that the bullet grazed a rib and lodged in the president’s lung, stopping just about an inch from his heart.

The president was rushed to nearby George Washington University Hospital. Doctors said later the president’s good health was a significant factor in his surviving the surgery and later complications. The medical team reported the 70-year-old Reagan had a physique like that of a 30-year-old muscle builder.

In the aftermath of the assassination attempt, announcements of presidential nominations were put on hold. Gradually, the White House returned to a more normal schedule. Pope’s nomination to be appointed Mint director was announced April 21 and the president returned to the Oval Office on April 25.

Had President Reagan not survived, Pope and other Reagan appointees may never have assumed office. (Vice President George H.W. Bush would likely have appointed his own team.) The monumental decisions the Reagan appointees at Treasury made during his first year in office — not opposing the resumption of commemorative coins, changing the alloy of the 1-cent denomination and selling silver from the government’s stockpile, to name just a few — set coin collecting on a new and exciting path.

Next month: Reversing more than 25 years of Treasury policy.