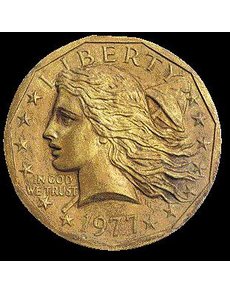 Author’s photograph taken at the Smithsonian Institution, by permission of Dr. Richard Doty.

Last week, I discussed coins that are in circulation today — at the end of 2011 and the beginning of 2012.

The panorama in 1979 was both similar to (in circulation patterns) and different from (design changes) that of today — with Lincoln cents (no significant design change since 1909), Jefferson 5-cent coins (no change since 1938), Roosevelt dimes (same since 1946) and Washington quarter dollar (nothing new since 1932 except the 1776-1976 Bicentennial coin). Kennedy half dollars were nowhere to be seen. Eisenhower dollars, minted from 1971 to 1978, were now stopped, but I never got one in change.

Eisenhower dollars, the same diameter as Morgan dollars and Peace dollars, found their best use on gaming tables in Nevada, where they were much appreciated by the casino operators. Earlier, dollar substitute tokens, most of them made by the Franklin Mint, were in common use. These bore casino names and were quite popular. However, a token was a token, whereas an Eisenhower dollar was real money.

In 1979, the Anthony mini-dollar made its debut, following ideas and experiments dating back to 1977. In theory, one of these dollars depicting Susan B. Anthony would last in circulation for perhaps 16 years, as compared to a couple of years for a paper dollar. Great economies would be effected with the switch to a coin.

However, the people at the Mint did not reckon with the political clout of the Crane Paper Co. from Massachusetts. The idea of not having paper dollars wouldn’t fly past Congress.

Chief Engraver Frank Gasparro, a fine friend of mine who hosted me in various visits to his office at the Philadelphia Mint over the years, discussed the mini-dollars with me on several occasions.

Frank, a traditionalist, thought that for the new coin a Liberty Head with pole and cap, taken from the 1-cent piece of 1793, in turn inspired by the Libertas Americana medal, would be ideal. Earlier he had devised such an image for a medal issued by the American Numismatic Association.

In 1977 he contacted Ed Rochette at the ANA, to see if permission could be given to adapt this for the dollar coinage.

Models were made, and he was very impressed with the galvanos. Numismatists who learned of the new design were equally enthusiastic.