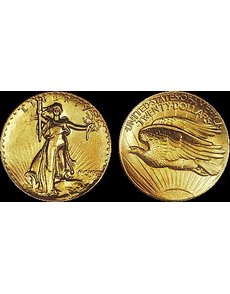 This 1907 Saint-Gaudens, Roman Numerals, Sans Serif Edge, Ultra High Relief double eagle, graded Proof 58, sold for $1,057,500. The coin was one of the first three Ultra High Relief patterns struck and was carried as a pocket piece.

The lot description indicates that it is one of the first three Ultra High Relief patterns struck and was “Undoubtedly carried as a pocket piece by some early recipient.” Another Ultra High Relief coin graded Proof 69 sold at a June 29 sale for $2.76 million.

Those who love Saint-Gaudens double eagles also love historic memorabilia related to his coinage. Evidence of this appreciation is the $94,000 realized by the original 1904 Theodore Roosevelt letter to the Treasury secretary that had the famous statement, “Our coinage is artistically of atrocious hideousness.” Comparable sales for such important numismatic documents are few and far between. In 2005, Heritage offered a 1907 Theodore Roosevelt letter where he addressed the omission of the motto IN GOD WE TRUST from Saint-Gaudens’ new $10 and $20 coins. That letter realized $43,125.

The market for the top end of the $20 Saint-Gaudens double eagles market continues to be highly tricky and coins don’t always bring more when resold. For example, Heritage offered a 1921 double eagle, graded Mint State 65 and carrying a Certified Acceptance Corp. sticker, that has a long ownership history tracing back to the Belden Roach Collection (sold by B. Max Mehl in 1944). The issue has been called the “rarest collectible Saint in high grade.” It sold for $1,012,000 at a 2007 auction and realized “just” $587,500 when offered on Aug. 3.

Another repeat performer was a 1927-S double eagle graded MS-67 with a CAC sticker that realized $282,000. Its last trip to the auctioneer’s podium was even more recent: It sold for $276,000 when offered as part of the Duckor Collection in January. The coin sold for the same bid eight months apart. The difference in the prices realized is a result of Heritage raising its buyer’s fee, from 15 percent, to 17.5 percent. ¦