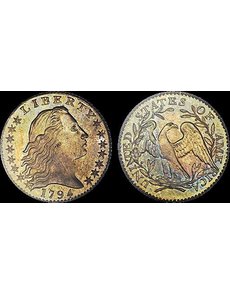 The market’s current taste for finest-known early rarities was evidenced by the sale of this 1794 Flowing Hair half dime graded Specimen 67. It brought $367,775 at Heritage’s Dallas ANA auction on Oct. 18.

At Heritage Auctions’ recent sale held in conjunction with the second, and last, fall American Numismatic Association show, Oct. 18 to 21, the sale of two coins provided additional evidence of the current tastes at the apex of the rare coin market.

Rare early U.S. coins of the absolute highest quality are blazing white hot. The top five lots in the auction were not dominated by gold. Instead they featured coins produced in the first decade at Philadelphia’s Mint.

The price of quality was readily apparent with the auction of an 1802 Draped Bust dollar graded Proof 64. The catalog description labeled the coin “iconic” and calls the four examples in Proof “fabulous rarities.” It realized $411,250. On its last trip to the block in 2005, it brought $316,250 when offered as part of Heritage’s auction of the Jack Lee III Collection.

Yet, the price pales in comparison to the two finest known examples, which are listed in the roster as grading Proof 65 Cameo. One sold for $920,000 in 2008 while another realized $851,875 when offered by Heritage in August.

The present offered example seemed on the surface to satisfy the market’s current taste including an unbroken pedigree that went back to 1890 and undoubted rarity (in fact, the lot description notes, these Proof 1801 to 1803 dollars are rarer than the legendary 1804 dollar). Still, it sold for less than half of its two gem peers.

The third highest achiever was a 1794 Flowing Hair half dime graded Specimen 67 by Professional Coin Grading Service. It sold for $367,775 and is the finest known Specimen strike of the issue. While the description noted that the offered example was the only Specimen piece in any grade at PCGS, Numismatic Guaranty Corp. had graded several Specimen examples.

Both the dollar and half dime sold for roughly comparable amounts in Dallas. The dollar is a big, flashy, known rarity.

The half dime is a diminutive piece fit for a connoisseur, a piece marked by exquisite preservation and delicate color. In light of these differences, the price of the Specimen 1794 half dime may be even more impressive than the slightly higher amount achieved by the 1802 Proof dollar. ¦