A market for odd Mint items 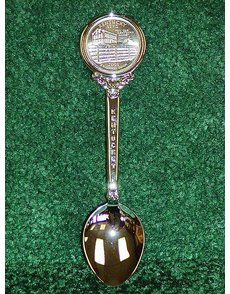 One of the more interesting collectible 50 State quarter dollar spoons is one where “Kentucky” is spelled “Kentuckey” on the spoon’s handle. The Mint corrected its mistake and offered buyers of error spoons a free replacement.

Whatever happens to some of the more unusual collectibles created by the U.S. Mint in recent years when they reach the secondary market?

One of the ways the Mint sought to capitalize on the 50 State quarter dollars program from 1999 to 2008 was through the sale of collectibles.

Some products were obvious, like sealed bags and coin rolls. Others were more creative, including collectible spoons with State quarters and first day coin covers that combined a canceled stamp and a State quarter.

Do these spoons have any value today beyond face value? Perhaps surprisingly, a healthy aftermarket exists for some of these spoons, with a key issue and a variety to spice things up.

While the early spoons had production figures approaching 20,000, later spoons were produced in more modest quantities.

For example, around 5,000 spoons were sold incorporating a 2002 Ohio quarter dollar.

The earlier spoons are the least expensive, since more are available. A set of all 10 spoons produced in 1999 and 2000 sold for $10.49 in an April 13 eBay auction — for a net price of just over $1 per spoon. Groups of early issues like the 1999 Delaware spoons are available for less than $2 per item.

Even an error spoon is found in the series, with the 2001 Kentucky spoon having a variant where the state name is misspelled “Kentuckey” on the spoon. An example of this error spoon sold for $200 in an April 13 eBay auction, right in line with one that sold in 2011 for $195. ¦