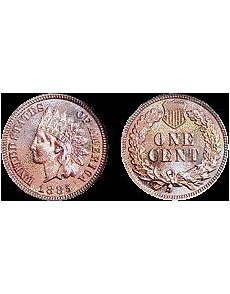 Dealer William Pukall had hundreds of Mint-wrapped Proof Indian Head cents in the 1950s, dating back to the early 1880s. Shown here is a gem Proof 1885 cent from another source.

Since day one in my numismatic experience, the Indian Head cent has been one of my favorite series.

The motif made its debut with pattern cents in 1858 when the Mint decided it wanted to replace the Flying Eagle type as difficulties had been encountered in striking. The head and tail of the eagle were opposite in the dies from the heavy agricultural wreath on the reverse, so the eagle was often weak in those areas.

After a run of 1858 Indian Head cent patterns in combination with several different reverses, the design became official in 1859, combined with a laurel or olive (the Mint used both terms) wreath.

This reverse lasted but briefly, and in 1860 the oak wreath and shield type was introduced. Coinage was in copper-nickel. In 1863, when the outcome of the Civil War was uncertain and all coins were hoarded, a flood of copper tokens served well in commerce.

The Mint noticed the success of these, and in spring 1864 the copper-nickel composition was dropped and bronze was adopted, saving considerable cost. With some minor changes, the type continued through 1909 when it was replaced by the Lincoln cent.

Last week, I mentioned that my first “serious” collection in the early 1950s, apart from enjoying finding coins in circulation, was a set of Proof Indian Head cents.

My first purchase was a glittering Proof 1859 Indian Head cent bought for $11 from the Copley Coin Co. of Boston. That was expensive. Most from 1879 to 1909 cost $3 to $5 each. I soon answered an advertisement in the Numismatic Scrapbook placed by William Pukall of Union City, N.J. He soon became a friend and a supplier of inventory to my fast-growing, but still small coin dealership. He had a vast stock of minor Proof coins dating from the 1880s to the last Matte Proof cents and 5-cent coins of 1916.

Where he acquired the coins I do not know. Each coin was absolutely pristine and whether in bronze or in copper-nickel alloy had a light blue tint, possibly from the thin tissue paper the Mint wrapped them in.

Mr. Pukall told me that on his own, beginning in 1914, he ordered rolls of current coins, including Mint-marked issues, directly from the Philadelphia, Denver, and San Francisco Mints. There was not much interest in Mint-marked coins until albums became available in the 1930s, so he was a pioneer in the field. He also bought rolls of 1916 Standing Liberty quarter dollars — remarkable to think of today when a single coin from such a roll is worth on the long side of $10,000!