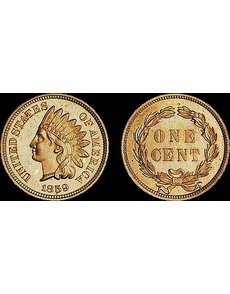 Ever since day one in my numismatic life I have enjoyed Indian Head cents. Starting this week, I will share my experiences.

I date my serious interest in rare coins to 1952 when I was 13 and given two Whitman folders for Lincoln cents. I soon bought A Guide Book of United States Coins, and a wonderful world opened before my eyes. Soon, I was spending much of my spare time looking through rolls of coins obtained from the local Forty Fort (Pennsylvania) State Bank.

I was very aware of old coins before then, but did not know about the Guide Book or, for that matter, much else on the subject.

Around 1945 or 1946 in my home town of Honesdale, Pa., a friend of our family had a home in which a dozen or more Indian Head cents were embedded face-up in a concrete walk near the front door. I remember looking at these strange coins and their long-ago dates and marveling how wonderful it would be to own even one.

Around the same time I had such an opportunity. The Episcopal Church had a fundraising auction featuring donated items, and I was the successful bidder for a few dollars on a cast iron bank filled with worn Indian and Lincoln cents. I was not smart enough to save them, and traded the coins away for other hobby items. My interests included rocks and minerals, post cards, fossils, Hardy Boys and Tom Swift books, travelogues, gardening, comics, and making things such as a crystal radio set and model airplanes.

Later I set about forming a personal collection of Proof cents. The first coin I ever ordered through the mail was an Indian Head cent — a Proof 1859 cent from the Copley Coin Co. run by Maurice Gould and Frank Washburn in Boston. The price paid was $11, the full market price at the time. It was a glittering little gem. What a treasure!

I liked my beautiful Proof 1859 cent and, suitably inspired, decided to buy some other Proof cents to go along with it. I recall contemplating an 1877 cent offered for $90, and passing it by in favor of buying most of the more common dates from 1879 to 1909 at $2.50 to $3.50 each, plus for somewhat higher prices, the other years from 1860 onward. My main suppliers were mail-order dealers Urban C. Thobe and William L. Pukall.

Mr. Pukall, of Union City, N.J., came to be a friend and major supplier of inventory, apart from Indian Head cents, once my business, which I started in a small way in 1953, moved into the fast lane, which it did rather quickly. I issued my first illustrated catalog in 1955.