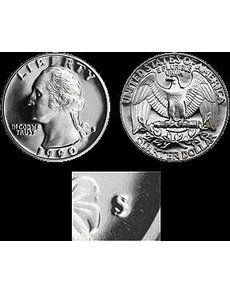 A collector has less than a 1-in-1,300 chance of finding a 1990-S Washington, Doubled Die Obverse quarter dollar in either the 1990-S Proof set or 1990-S Prestige Proof set. The pickup point is the doubling on the S Mint mark.

A regular Proof 1990-S quarter dollar trades for less than $50 in the highest grade of Proof 70.

Most doubled dies have a pick-up point (an area where the doubling is most prominent) that is used to identify the variety.

When the 1990-S Doubled Die Obverse quarter dollar was discovered by Jim Carr, he noted that its pick-up point was different. The doubling is most prominent on the Mint mark, a dramatically doubled “S.” Historically, Mint marks were added to dies after they were impressed by the hub. In the mid-1980s Mint marks were added to the hub, and this coin was the first doubled die to clearly show a doubled die Mint mark.

Proof coins are carefully scrutinized by the U.S. Mint and any Proof coin irregularity captures the interest of collectors.

On average, only about 2,500 coins are struck from a single Proof die. In 1990, 3.3 million Proof sets and Prestige Proof sets were sold, and just 2,500 of these coins were scattered among them. A collector has less than a 1-in-1,300 chance of finding a 1990-S Doubled Die Obverse quarter dollar in a Proof set.

Even given those long odds, many numismatists believe that the 1990-S Doubled Die Obverse quarter dollar is still far scarcer than it should be. After all, the 1990-S Proof set is the single most thoroughly examined Proof set of the modern era.

Fewer than 20 examples of the 1990-S Doubled Die Obverse quarter dollars are known and only 15 have been graded by Numismatic Guaranty Corp. and Professional Coin Grading Service combined. NGC has certified four, the finest grading Proof 69 Ultra Cameo. PCGS has graded 11; the finest is the lone Proof 70 Deep Cameo that Heritage sold in April for a record price.

A Proof 68 Ultra Cameo example can still be purchased for less than $500. Proof 69 Ultra Cameo examples trade for over $1,000. As the finest example of this variety is pushing the $5,000 mark, here is a clear message to collectors: Check your 1990-S Proof sets and Prestige Proof sets.