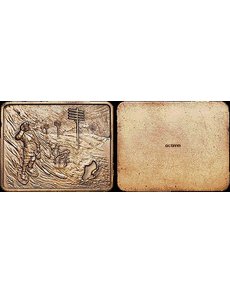 The catastrophic blizzard of March 12 and 13, 1888, that buried New York City under an officially recorded 21 inches of snow, with drifts up to two stories in height, is captured on this O.C. Tanner plaquette.

Items featured in our columns often trigger memories in our readers, who contact us to share their recollections.

In April 2001, we discussed a haunting 1916 relic medal made from copper of the first telephone lines linking New York and Boston. The 76-millimeter medal depicted a violent winter storm with such realism that the viewer could almost feel blasts of arctic cold blowing from it.

The medal’s issuer was the Telephone Pioneers of America, founded in 1911, with inventor Alexander Graham Bell among its 243 founders. The pioneers remain active today with an enviable record of humanitarian achievement.

Adding to the facts of our story was the home page of BellSouth Pioneers Region 16 for April 2, 2001, sent in by reader Steve Pearson. The page verified that the raging storm depicted on the medal was indeed the catastrophic blizzard of March 12 and 13, 1888, that buried New York City under an officially recorded 21 inches of snow, with drifts up to two stories in height driven by gale force winds of 60 miles per hour or more. Temperatures reached minus five degrees below zero Fahrenheit or worse, resulting in many deaths.

The telephone had been invented only 12 years earlier, and all service was carried on the “open wire” system on wires out in the open and exposed to all that the weather could hurl at it. With telegraph and train service totally disrupted by the 1888 storm, telephone service between Boston and New York City was kept going by determined linemen on foot, including 23-year-old Angus MacDonald (born 1864, died 1958). He walked the line of poles throughout the blizzard, repairing breaks and maintaining service despite the horrific conditions.

Angus is the lineman on the medal, shown more clearly on a recently examined 91- by 73.5-millimeter rectangular plaquette bearing the same scene in greater detail. He carries a lantern, coils of wire are strung over his shoulders, and he wears heavy winter gear and snowshoes. To the right is a line of poles, each carrying some 40 wires.

Shown in the background on the plaquette is a steam locomotive, tender and two freight cars in deep snow on the horizon. The incuse space at right is an outline map of New England, and the reverse carries the tiny incuse name, O.C. TANNER. The piece was probably struck by the Robbins Co. of Attleboro, Mass.

Sometime after the storm, Angus MacDonald was asked to pose for a painting, called Spirit of Service. Prints were made and presented to successive Telephone Pioneer presidents. Both medal and plaquette reproduce this painting and capture both nature’s implacable violence and the dedication of America’s working people.