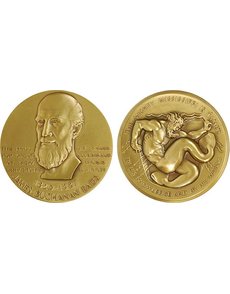 The Hall of Fame for Great Americans medal depicting James Buchanan Eads is the work of sculptor Robert Weinman, son of Adolph A. Weinman, designer of the Winged Liberty Head dime and Walking Liberty half dollar.

Issued from 1962 to 1977, a virtually forgotten medallic series rich in sculptural art and history brought together a great university, a New York City and national landmark, 42 top-flight sculptors and the nation’s then-leading medal-makers and marketers to create a series of unmatched, and unachieved, potential.

A 94-medal medal series issued for the Hall of Fame for Great Americans at New York University program, portraying America’s greatest statesmen, scholars and the like, should have been a triumph of art and history, but was a monumental commercial failure.

The Hall of Fame itself was launched in 1900 as America’s answer to Britain’s Westminster Abbey. The hall centered on the Stanford White-designed Gould Library and a 630-foot long colonnade that would house bronze busts of immortals chosen by an electoral college in “classes” elected from 1901 to 1977. NYU abandoned its Bronx Campus in 1977; the colonnade program was discontinued by the new campus occupants soon after.

The medal program was headed by a director of NYU and an art committee chaired by the great medallic sculptor Donald De Lue.

Medallic Art Co. struck all the medals, which were distributed by Coin & Currency Institute of New York City. Several fatal decisions made at the beginning impeded the series’ success, including an overly ambitious game plan calling for striking each HOF medal in three sizes and two metals: 44-millimeter .999 silver, and 76- and 44-millimeter bronze. Also restrictive was the requirement that each had to bear the 48-letter, 10-space designation the hall of fame for great americans at new york university, which was distracting.

An example of a somewhat obscure honoree was James Buchanan Eads. The medal design by Robert A. Weinman bore a portrait patterned after the Hall of Fame bust by Charles Grafly: a muscular, bearded bust of this great hydraulic engineer and builder of the first bridge over the Mississippi River, his feats represented by a massive merman struggling in a newly dredged river channel with legend the mighty mississippi is tamed by his knowledge and by his works.

Weinman created six HOF medals, two medals for the Society of Medalists and many others including Coin World’s U.S. Mint Medal Series. Hall of Fame for Great Americans medals are now available on the numismatic market at highly reasonable prices.