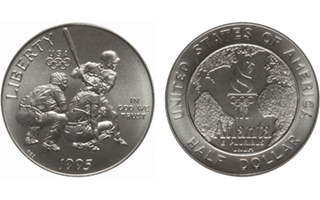 If there’s a forgotten U.S. coin with a baseball design, it is the 1995-S commemorative half dollar struck to honor the 1996 Atlanta Centennial Olympic Games. It was one of two commemorative Olympic half dollar types struck in 1995, with two more obverse designs produced in 1996. These half dollars, along with eight separate silver dollar designs and four gold $5 coins, made the 1995 to 1996 Olympic coin program the most ambitious program in the modern commemorative era. If a collector sought to buy one of each design in Proof and Uncirculated finish, 32 coins would be needed.

Collectors were clearly overwhelmed by the number of coins, and mintages were far lower than what were authorized, even after Congress lowered the maximum authorized mintages for the program.

The 1995-S Baseball copper-nickel clad half dollar saw a mintage of 118,087 Proof coins and 164,605 Uncirculated pieces. These large numbers have kept prices down, and with a bit of searching, both Proof and Uncirculated versions of the Baseball half dollars may be found for less than $20 each. In contrast, the Uncirculated 1996-S half dollars — both the Swimming and Soccer designs — had very low Uncirculated mintages of 49,533 and 52,836 pieces each, making those modern-era key issues.