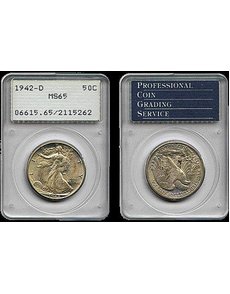 An early PCGS holder, of the style used by the firm when it was founded in 1986, lacks the hologram security feature found on later PCGS slabs. A 1998 ANA Portland convention exhibit focused on the evolution of PCGS holders.

I’d like to tell you how an obscure one-case exhibit of little monetary value caused a sensation at an American Numismatic Association convention.

The time was August 1998 and the place was Portland, Ore. My wife, Christie, and I arrived early, landed in Portland on July 31, and enjoyed some sightseeing in the eastern part of the state. Then it was back to Portland for Auctions by Bowers and Merena Inc.’s Rarities Sale on Monday night.

Next came Professional Numismatists Guild Day on Tuesday. The doors to the ANA show opened at 10 a.m. Wednesday, and a large crowd of visitors streamed in. Activity was strong for the rest of the week, but not as dynamic as it might have been had it been held in a more populated section of the country.

While buying and selling occupied a lot of my time, I also talked with old friends and made new ones. I also took in several Numismatic Theater presentations and society and club meetings.

One of the most interesting was on Wednesday when John Evans gave a program to the Civil War Token Society. The subject was oysters — mentioned on tokens. Oysters are hardy creatures, John informed the audience. With their shells closed, they could travel long distances by rail.

Civil War tokens were then and still are one of my favorite specialties — one of the relatively few popular series that has not been “researched to death.”

That evening David Hall and I gave a presentation on behalf of Professional Coin Grading Service and made the Universal Rarity Scale, which I had devised in 1993, available for free and uncredited use by the numismatic community.

Oh yes, the exhibits. They were varied and, as usual, wondrous. American, world and ancient numismatic specialties were well represented. Eye-popping Conder tokens from the 1780s and 1790s were displayed by Jerry and Sharon Bobbe. One of the more whimsical setups had “road kill” coins, mostly common and modern, that had been picked up by a numismatist who had cycled nearly 3,000 miles. Lots of fun!

However, one exhibit was the talk of the show. Mounted in a single case, it was a display of historical “slabs” used by PCGS starting in 1986, Numismatic Guaranty Corp. in 1987 and others later. And I still remember it to this day.

Since then holders have gone through more changes. What a nice exhibit these could make for a reprise at the August ANA convention in Philadelphia.