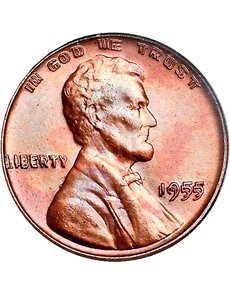 Taking inspiration from Nathaniel Hawthorne’s Twice Told Tales, I comment on the 1955 Lincoln, Doubled Die Obverse cent. By any measure, this is the most famous die variety in U.S. numismatics.

My first encounter with the coin came not long after they reached circulation. Jim Ruddy, who would become my partner in the Empire Coin Co. in 1958, operated the Triple Cities Coin Exchange in Johnson City, N.Y. One day a most curious coin was shown to him: a 1955 cent with all of the lettering and digits doubled, as iinn ggoodd wwee ttrruusstt and 11995555! Then he was shown another.

Each, as bright as the day it was minted, had been found under the cellophane in a pack of cigarettes from a vending machine. The retail price for cigarettes was 23 cents a pack, and change for the anticipated quarter dollar payment was prepared by enclosing the two cents.

News spread, and Jim offered to pay 25 cents each for every cent he could find. Soon, he had a few dozen, with no buyers in sight, and he canceled his offer! At the time there was not much interest in modern coin oddities. These began to be publicized in 1956, at first called the “shift” cent. Kenneth Bressett a few years later coined the term “doubled die” when the variety was first listed in A Guide Book of United States Coins, known as the “Red Book.”

Empire Coin Co. built up an active trade in these, making a market for them. At one time, we had more than 800 on hand. Seeking to learn more, I inquired at the Philadelphia Mint and learned that on a particular day in 1955 several presses were coining cents, each dumping the coins into a box where they were then collected and mixed with the cents from the other coining presses.

Late in the afternoon, a Mint inspector noticed the bizarre doubled cents and removed the offending die. By that time, the die had produced somewhat more than 40,000 cents, about 24,000 of which had been mixed with normal cents from other presses. The decision was made to destroy the cents still in the box and to release into circulation the 24,000 or so pieces that were mixed with other cents.

The Mint had no reason to believe that these would attract attention or have value with collectors. They were simply viewed as defective coins. Through later “finds,” Jim and I learned that there were three points of release: in and around Johnson City, the Boston area, and in western Massachusetts. Likely, about 3,000 to 4,000 1955 Lincoln, Doubled Die cents exist.

And, the coins that were once expensive at 25 cents each are now worth thousands of dollars each! I wish I had kept one!