A debt of gratitude 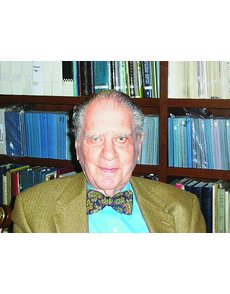 Eric P. Newman sits in the library of the Newman Money Museum in St. Louis in this photograph taken in 2006. Newman celebrated his 100th birthday May 25.

Imagine a world where the latest word on Fugio cent varieties was written in 1875.

Imagine that there were but two varieties of Virginia halfpence — With Period and Without Period — and no guide to discern restrike American Plantation tokens from the 1688 originals.

Imagine that you depended upon a work written in 1843 to categorize your Continental Currency, and nothing ranked higher on your want list than an example of the rare and historic Good Samaritan shilling.

This is the horrifying alternative reality if a young Eric P. Newman had decided to collect stamps or die-cast cars. People wouldn’t know that Nova Constellatio coppers were made in England, nor that 1804 Draped Bust dollars weren’t struck in 1804, nor that Benjamin Franklin personally sketched the designs for the February 1776 fractional note issues of the Continental Congress.

There has never been a man more responsible for the state of scholarship in American numismatics than Eric P. Newman, and only 19th century researcher Sylvester S. Crosby comes close.

Newman’s research has always been carefully accomplished, depending on primary sources and careful analysis of the artifacts we collect. It’s no wonder he’s right so often.

His curiosity is boundless, even after nine decades of playing with coins and paper money, and his joy at learning something new is as pure as a child’s. You can see it in his eyes, you can hear it in his voice and you can read it in his writing.

Eric Newman hasn’t just written often and written well, he has literally revolutionized the state of research on early American subjects. It’s pretty easy to write about coins and have coin collectors slap you on the back — it’s like writing articles about biscuits for an audience full of dogs. But to write articles that are continually cited by historians is a different matter. It’s exacting, painstaking work. To academics, Eric is one of their own. As a coin collector, I’m happy that Eric will always be one of us as well.

I first met Mr. Newman (I’d never call him Eric then!) when I was about 14, at the American Numismatic Association Summer Seminar one July. My friends and I, one of whom is now a professional numismatist and another of whom is now a college professor, felt like we were about to meet Elvis. He was so disarming, so friendly, so funny, so enthusiastic about the subjects of numismatics and history, that he just felt like one of the guys, another cool octogenarian.

Over the years, as the writing I’ve done has depended more and more upon the bedrock of Newman’s, I’ve come to appreciate his work that much more.

There is not a pair of eyes cast upon this page that doesn’t owe him a thank you.