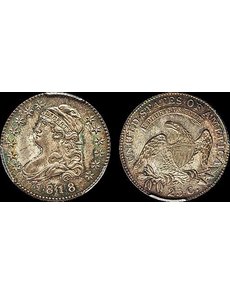 This Mint State 65 1818 Capped Bust quarter dollar was offered at auction at least seven times in the past decade, in several different encapsulations. It realized $12,650 to $34,500 in its various appearances.

It’s sometimes a guessing game as to what a coin will bring when it crosses the auction block. Often, the same coin will be offered multiple times over the years.

A colleague brought to my attention an 1818 Capped Bust quarter dollar that’s traveled to the auction block seven times in the past decade, offered by nearly every major auction firm in the business.

While many coin buyers prefer bright, untoned coins, this quarter dollar has retained its gray and sea-green toning and has not been
“restored” to a brightness unbecoming to an early 19th century coin. Just looking at its various photographs in its offerings provides a lesson in how photography can struggle to capture the look of toned coins.

Based on the various auction lot descriptions, what appears to be the first auction appearance of the subject coin in the new millennium was in April 2003 at Bowers and Merena where it was graded Mint State 65 by Numismatic Guaranty Corp. and realized $17,250. Next it was sold as part of the Oliver Jung Collection by American Numismatic Rarities in July 2004 where it brought $18,400. From there it traveled to Goldberg Auctions in September 2006, where it went unsold at an estimate of $11,000 to $12,000. It next appeared at a January 2007 Stack’s auction where realized $12,650.

In August 2011 it made its first of three appearances at a Heritage auction, selling for $14,950 and noted as once being part of the Jung Collection.

It then appeared in a January 2012 Heritage auction, now in a newer prong-style NGC holder where it realized $16,100.

In April 2012 it made its last trip to the auction block, now in a Professional Coin Grading Service MS-65 encapsulation with a Certified Acceptance Corp. sticker. This time it realized $34,500. The price represented a substantial jump, nearly doubling its next-highest price when offered as part of the Jung Collection.

For a single coin to have seven auction appearances in a decade is remarkable. Yet, but for the final sale, the gains by the prior sellers were modest.

If one assumes that the auction houses made 15 percent on each transaction, the fees alone in selling this coin at auction over the past decade could have purchased it in all but its most recent sale. An unusual market example, indeed. ¦