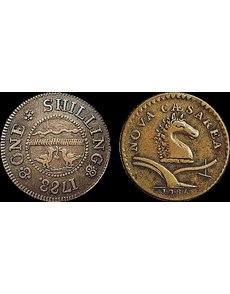 Animals on U.S. Colonial coins include the songbirds, earthworm and snake on the reverse of a 1783 Chalmers shilling, left, and the horse’s head on the obverse of a 1786 New Jersey copper, right.

With a big enough barn and enough feed, a collector could assemble quite a zoo featuring only animals depicted on early American coins. It might be less messy and less noisy to just collect all the coins instead.

Eagles occur in plenty, from the crude rendition on the New Yorke in America token to the chicken-looking bird of the 1791 Washington, Small Eagle cent. Perhaps on the 1791 Washington, Large Eagle cent, the bird has pretensions of authenticity. You’d need a whole aviary to house all of the various eagles on early American coins: the one on the Brasher doubloon, those on Massachusetts cents and half cents, the Immune and Immunis Columbia pieces, the 1792 Getz patterns and more.

Which Colonial coin is the only one with an eagle on both sides? The New York Excelsior copper with Eagle reverse is the coin.

Among other birds in your Colonial menagerie would be common songbirds, namely those found on the 1783 Chalmers shilling. They’re seen fighting over the collection’s only invertebrate, an earthworm, and ignoring the only reptile in the collection, a snake.

Snakes and birds are also seen on some varieties of Saint Patrick’s farthings. On a few rare varieties, a little bird appears that has been long identified as a martlet — one more addition to the aviary.

Among the other critters seen on the hundreds of die varieties of Saint Patrick’s pieces are what researcher Walter Breen called “sea beasts” and tiny pigs. The pigs look much tinier and friendlier than the hogges of the Sommer Islands coins.

Joining pigs in the Colonial coin petting zoo are horses of every size and description. So many different types of horseheads appear on the New Jersey coppers that they even get described as resembling other animals: camels, llamas, deer, even serpents. And don’t forget the tiny horse on the reverse of the Virginia halfpence.

You might want to have a pool for beavers to play in, since they appear on the 1796 Castorland medal and the 1820 Northwest Company token. It’s probably best to keep them away from the stealthy running fox on the reverse of some New Jersey coppers, however. The same could be said for the innocent-looking deer of the Higley coppers. Of course, the predatory foxes might become prey themselves if they were kept near the lions from the reverses of Virginia halfpence and American Plantation tokens, or the one found hidden on the reverse of the Auctori Plebis tokens.

Since elephants tend to assemble in groups, it’s a good thing they appear on the London, Carolina and New England Elephant tokens. They’ll be much happier with some company.