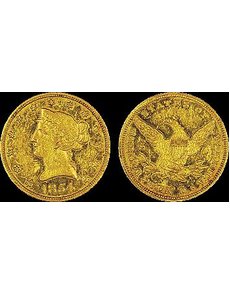 This newly discovered and unique Proof 1854 Coronet gold eagle raises several questions, among them being, first, how can a Proof coin be circulated, and, second, how can a circulated Proof have cameo contrast?

The recent announcement that Numismatic Guaranty Corp. had identified and certified the only known Proof 1854 Coronet gold $10 eagle as grading Proof 55 Cameo brought up two interesting issues. First, how can a Proof coin be circulated and second, how can a circulated Proof coin have cameo contrast?

“Proof” designates a method of manufacture, and a coin that is Proof is always a Proof. This is why many U.S. pattern coins in well-circulated condition are still called Proofs, even when nothing visually remains on the coin — like mirrored fields or frosted devices — that would suggest that it was produced as a Proof.

Looks alone do not necessarily identify a coin as Proof. Many Mint State coins — perhaps most notably Morgan dollars — exhibit deeply mirrored fields and fully frosted devices that are textbook Proof in appearance and are given the designation Deep Mirror Prooflike.

What sealed the discovery coin’s identity as a Proof was that careful examination showed that it was struck using the same reverse dies as known Proof Coronet eagles dated 1840 through 1848. Further, the coin showed squared rims, which are unlike the rims on regular issue 1854 Coronet eagles. Those factors, combined with its Proof appearance, confirmed its status as one of the few higher-denomination Proof gold coins from the 1850s known to collectors today.

For a circulated Proof to be designated Cameo or Deep Cameo is highly unusual, but such evaluations are done on a coin-by-coin basis. For NGC to designate a Proof coin as cameo, the piece must display contrasting fields and devices on both sides.

Typically, classic Proof U.S. gold resides in the highest-tier of the rare coin market. However, the market for circulated Proof coins is well established. For example, in January 2011, a Proof 55 1893 Coronet $10 eagle sold for $3,737.50 at auction while an MS-61 Prooflike example sold for $1,207.50. Although the two gold coins were similar in appearance, the Proof came from a limited mintage of just 55 coins while the Mint State coin was from a mintage of more than 1.8 million.

That the discovery coin was submitted to NGC as a regular issue example and not a Proof is a reminder that unknown numismatic treasures still await discovery by sharp-eyed students of the hobby. ¦