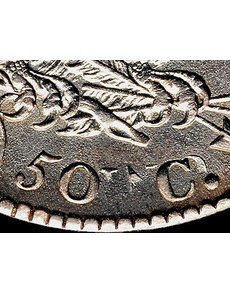 Image courtesy of Edgar Souders, author of Bust Half Fever.

A century ago in Philadelphia, the U.S. Mint was operating under the cloud of the War of 1812, which had begun the previous June. 1813 saw the success of Oliver Hazard Perry over the British fleet at the Battle of Lake Erie.

Future President William Henry Harrison commanded troops during the Battle of Thames, where the death of Tecumseh, the famous Shawnee warrior, left the Indian coalition without a strong leader, leading to the collapse of native support for the British.

The Mint was still dealing with a lack of copper planchets for production — shipments from England were unavailable due to the war. Previously, Matthew Boulton and James Watt produced the half cent and large cent planchets in England and shipped them to the Philadelphia Mint ready for coinage. Now the Mint had to find its own copper and manufacture the copper planchets from scratch.

The result was a limited mintage of 418,000 for the 1813 Classic Head cent, from two obverse and two reverse dies, each paired only once. Neither is rare, but as with all the years of this type, they are very elusive in original brown condition.

The only silver coin produced during 1813 was the Capped Bust half dollar, with a mintage of 1,241,903 pieces. Seven obverse dies and eight reverse dies were used to produce 10 die marriages. No rare marriages exist for the year but the popular Overton 101 (Early Half Dollar Die Varieties, 1794-1836 by Al C. Overton, edited by Donald Parsley) showing the die cutting error of 50C over UNI, sells for a premium.

A couple of other marriages sell for slightly more than type price, but none will prevent the average collector from completing a marriage set for the year.

Many of the half dollars from this year were struck from worn-out dies, showing clash marks and die cracks. Those of us who love the late die state coins have a cornucopia of choices to fill our collections. Finding coins that still exhibit original surfaces is very difficult but can be done with a little luck and patience.

The gold $5 half eagle, like the half dollar, was the only gold denomination minted during the year. Only 95,428 pieces were struck, from a single die pairing. Although the mintage seems very low, it is one of the more common dates in this type.

Collectors will still have a difficult time locating an original example, as many were melted or cleaned since 1813. Discovering that elusive deep yellow-gold coin for your collection will greatly reward your patience.

The year 1813 provides a challenge for the die marriage collector, but a set can be completed, even on a budget. There are no die marriage rarities.