A buffet of rarities for all appetites in CSNS sale 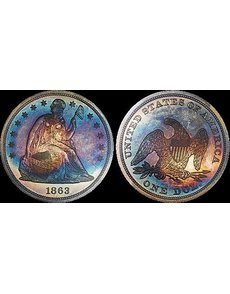 A collector seeking a nearly perfect type coin may be tempted by this 1863 Seated Liberty dollar graded Proof 69, with its deep rainbow toning in rich jewel tones of aquamarine, violet and amber.

While the Walton 1913 Liberty Head 5-cent piece is the star of Heritage’s Central States Numismatic Society auctions, April 24 to 28, dozens of other rarities are set to impress even the pickiest connoisseur when they cross the auction block in Schaumburg, Ill.

Among the many spectacular silver dollars is a rainbow toned 1863 Seated Liberty dollar graded Proof 69 by Numismatic Guaranty Corp. Its status as an exceptional survivor from the original mintage of 460 Proof dollars is unquestioned and the catalog confidently states, “Without a doubt, this is the single finest proof No Motto dollar that exists today.”

Those seeking the ultimate Proof Morgan dollar type coin may be tempted by an 1890 Morgan dollar graded NGC Proof 69 ? Ultra Cameo. It is essentially flawless with deep black and white cameo contrast. By looks alone it would fit in a collection of modern Proof U.S. issues where Proof 69 and Proof 70 is the norm.

The offering of a Mint State 65 1893-S Morgan dollar is always a noteworthy event and the extremely clean example in the Central States auction was last offered in 2009 where it realized $299,000. With just three or four other MS-65 examples known according to Heritage, the offering presents a rare opportunity.

Of course the auction offers numerous gold rarities. Among the most interesting is an 1852 Humbert $10 pioneer gold piece graded MS-68 by NGC with a Certified Acceptance Corp. green sticker. Its quality is undeniable. The coin is described as the “finest business strike California gold piece” and “by far the finest U.S. Assay Office gold coin.” One of numerous rarities from the Eric P. Newman Numismatic Education Society, it has an ownership history that traces back to Augustus Humbert and includes “Colonel” E.H.R. Green, who also owned all five 1913 Liberty Head 5-cent pieces at one time.

Coin collectors love coins with fascinating stories and rich history, such as the 1906-D Coronet double eagle graded Specimen 66 by PCGS with a green CAC sticker. It is documented as the fourth example of six struck to mark the official opening of the Denver Mint on April 2, 1906, and was presented to Colorado pioneer Isaac Gotthelf. Heritage adds, “Seldom does a coin of such vintage appear with original documentation that places its creation exactly as to time and circumstances as well as place.”

It was last offered at auction in a 2007 Stack’s auction where it, along with some ephemera not included in the present offering, realized $172,500. ¦