A brief life in circulation 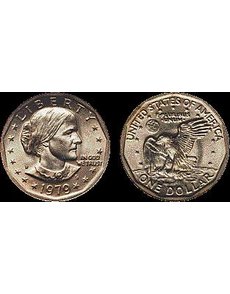 Continuing from last week I discuss the numismatic scene of 1979. Eisenhower dollars, minted since 1971, were not popular in circulation. Many were used, however, on gaming tables in Nevada.

The Treasury Department came up with the money-saving idea of a new coin – the mini-dollar – a small diameter dollar, not much larger than a quarter dollar. The theory was that they would be widely used, as quarter dollars were, and would replace paper dollars. As the paper bills wore out quickly, this seemed ideal.

Chief Engraver Frank Gasparro started experimenting in 1977 with a Liberty Cap dollar (illustrated last week), based on a traditional design. Discussions continued in Congress. Then that nasty part of American life, “political correctness,” intervened. Relevant members of the House of Representatives could not figure why some old depiction of Miss Liberty should be used when they could gain some political advantage by showcasing an early champion of women’s rights. Gasparro was commanded to discard the Liberty Head and cap design and do a motif with Susan B. Anthony.

He scouted around to try to find a photograph showing her smiling, or with some pleasing countenance, but all he could find were rather stern depictions.

Undaunted, he went ahead and made models, which were accepted. Dies were made and all was set. The first 1979-dated coins were “pre-struck” on Dec. 13, 1978.

It was anticipated that soon the paper dollar would be history. Wrong! First of all, vending machines were equipped to take quarter dollars and other coins, but not the mini-dollars of unusual diameter. Discussions with members of that industry revealed that a couple hundred million dollars or so would be involved in converting the coin slots.

Although Anthony dollars were not seen in circulation to any extent, complaints reached the popular press about such coins being confused with quarter dollars. Gasparro said that he was probably the first person to notice this, as shortly after they were released, he took one and spent it in the Mint cafeteria, where the cashier asked for more money, until Frank told her to look at the coin carefully — it was a dollar not a quarter dollar!

I never met anyone who got one in change. However, I do recall leaving New York City by automobile and going across the Tri-Borough Bridge headed toward New England, and seeing signs stating that Anthony dollars would be accepted at the toll booth. Post offices had them available as well, but there did not seem to be much call for them.