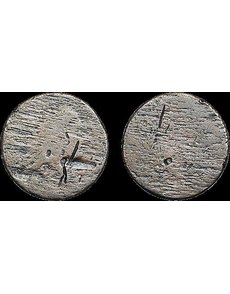 In the rare coin market, there’s a buyer for everything; an item just has to be at the right price. This includes coins in the very lowest possible state of preservation.

The firm graded it Basal State 1, which is the lowest possible grade on the 1 to 70 grading scale used today. More often this very low grade is described as Poor 1.

The term “Basal State” is well-known to aficionados of early U.S. copper coins as the lowest level of preservation described in Penny Whimsy by William H. Sheldon.

Sheldon introduced the term in a chapter called “Toward a Science of Cent Values” where he proposed a valuing system for pricing large cents that directly related condition and rarity.

Sheldon avoided using the term Poor because he found it a difficult term to define. Sheldon wrote, “It often means too much.” He related that he’s seen attractive, evenly worn pieces and others better called “junk,” including holed, mutilated, badly damaged or unidentifiable, under the broad Poor label.

Sheldon defines Basal State as: “Identifiable and unmutilated, but so badly worn that only a portion of the legend or inscription is legible. Enough must remain for positive identification of the variety, although for some varieties this need not necessarily include a readable date.”

That certainly describes this coin where enough detail remains to be able to identify it by its specific variety, Sheldon 11c, the Lettered Edge variety with a single leaf following DOLLAR on the edge. The edge, with sunken lettering, usually remains even when the obverse and reverse designs have worn off.

Further, the obverse design represents a one-year type, making its date of 1793 apparent even though it’s worn off.

The presence of Liberty’s profile and the edge lettering, along with part of the leaves over the date, allow for specific identification. While it was given a low estimate of $100 and up, it sold for $253.

Despite the coin’s unfortunate state of preservation, the buyer may have gotten a bargain. Another example of the type in Poor 1 condition with a faint but incomplete date and smoother surfaces realized $881.25 at a Nov. 4, 2012, Heritage auction. ¦