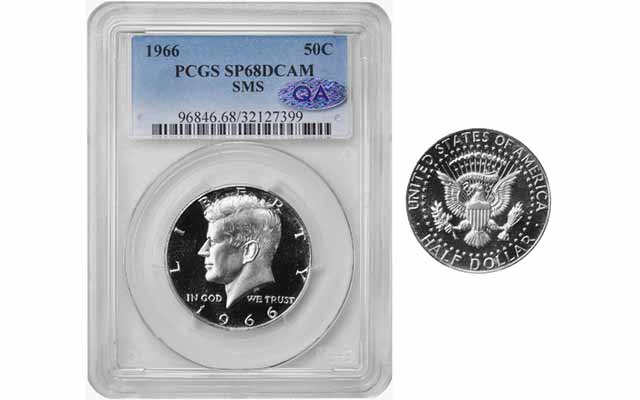 A 1966 Kennedy half dollar from a Special Mint set graded PCGS Specimen 68 Deep Cameo with a Quality Assurance sticker sold for $14,850 at a June 28 GreatCollections auction.

Modern condition rarities continue to bring huge prices when offered at auction, provided they reside with few others at the top of the Professional Coin Grading Service and Numismatic Guaranty Corp. population reports.

At a June 28 GreatCollections.com sale, a PCGS-graded Specimen 68 Deep Cameo 1966 Kennedy half dollar from a Special Mint set sold for $14,850. It is one of five like-graded examples at PCGS with none finer. Four bidders chased it above the $10,000 level, showing the depth of the market.

The slab carried a Collectibles Quality Assurance Co. QA Check sticker, which the firm states “provides a value added third party verification of solid quality PCGS and NGC graded coins.” An April 16 report posted on the firm’s website notes that it had approved 48 percent of the coins submitted to it (although that number was likely skewed upward due to submissions of high-quality 2015-dated coins.)

Certified Acceptance Corp. — known for its “green bean” and gold stickers — does not evaluate most modern-era coins, including Kennedy half dollars.

Whether the QA sticker impacted the price of this particular example remains unknown because of a lack of comparable sales over the past few years.

The last PCGS-certified example in this grade was offered at Heritage’s Jan. 8, 2009, Florida United Numismatists auction where it sold for $9,200. At that time it was one of only four pieces in this grade at PCGS.

It’s important to note that just a single additional example in this grade was certified by Professional Coin Grading Service in the past six years, despite the modern U.S. coin category receiving increased collector attention during this time period.

Statistics like this show the true rarity of many of these coins in top grades.

Special Mint sets were produced by the U.S. Mint in 1965 through 1967 as an alternative to Proof sets, which were not struck during this time. Coins from these sets were struck to a higher standard than Mint State coins and resembled Proofs with their reflective mirrors, but relatively few had meaningful cameo contrast between the fields and the devices. Today, those with Cameo and Deep/Ultra Cameo contrast are rare and coveted by collectors. The top examples are visually virtually indistinguishable from Proofs.

Earlier this year at Ira and Larry Goldberg Auctioneers’ pre-Long Beach auction, another SMS example graded Numismatic Guaranty Corp. MS-68 Ultra Cameo sold for $7,343.75, exceeding the estimate of $4,000 to $4,500. At the time it was one of 10 like-graded coins at NGC, with one finer in MS-68+ Ultra Cameo.